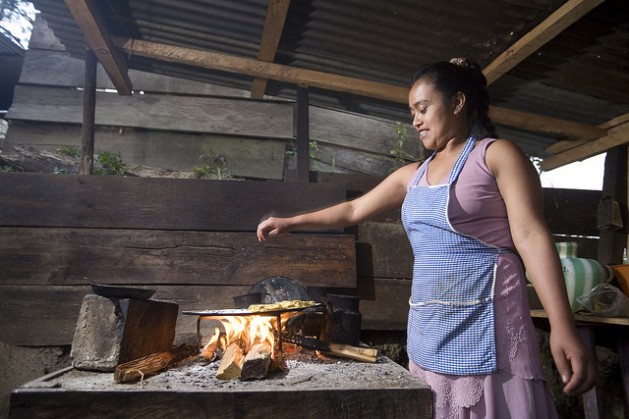 Firewood is still the main fuel used by Mexico’s poor, like this woman cooking in the southern state of Chiapas. Credit: Mauricio Ramos/IPS

MEXICO CITY, Apr 21 2014 (IPS) - When Mexico’s climate change law went into effect in October 2012, it drew international praise. But what has happened since then?

The best illustration of the lack of action so far is the Climate Change Fund, created under the law to finance adaptation and greenhouse gas emissions reduction initiatives, with national and international funds.

In 2012 it was assigned just 78,000 dollars for administrative operations, but was given no funds to finance projects. And this year there is not even a specific budget allocation for the Fund. Its operating rules are ready, but they have not been published.

Other problems in the implementation of the law have to do with the creation of a national climate change system, the effective reduction of greenhouse gases, and an assessment of adaptation and mitigation measures, according to public policy analyst Carlos Tornel with the non-governmental Mexican Environmental Law Centre (CEMDA).

These aspects are essential “in order to know what is being done at the three levels of government [federal, state and local], which would give us more concrete information on priorities for adaptation and mitigation,” Tornel told Tierramérica.

“Moreover, no mechanisms were established to evaluate the impact of the measures and to know where the money goes and how efficiently it is used,” he added.

Mexico was one of the first countries in the world to pass a specific law on climate change.

The law made the target of reducing national greenhouse gas emissions by 30 percent by 2020 obligatory, subject to the availability of funding and technology transfer, said the most comprehensive study on climate legislation, published in February by the Global Legislators Organisation (GLOBE International), which analysed the laws of 66 countries.

Mexico is the second-biggest emitter of greenhouse gases in Latin America, after Brazil, emitting 748 tonnes of carbon dioxide (CO2) a year.

In June, the government published its National Climate Change Strategy, which is to guide policy-making over the next 40 years.

It also created the Intersecretarial Commission, made up of 13 secretariats or ministries, and the Council, which includes scientific researchers.

A more concrete measure was the updating of the methodology used to measure contaminants released by motor vehicles.

But of Mexico’s 32 states, only 14 have drawn up a state plan on climate change, just seven have passed their own laws, and only 11 have measured their CO2 emissions.

Mexico, which is highly vulnerable to climate change, is already suffering the manifestations of global warming, such as more frequent and devastating storms, severe drought, a rising sea level, and a loss of biological diversity.

Mexico’s climate change law establishes measures to guarantee the optimal use of gas in industrial and oil installations, to promote the harnessing of the energy potential of waste products, and to create economic and financial incentives for the development of environmentally responsible businesses and industries.

But none of these actions has been carried out.

A new tax of three dollars per tonne of CO2 generated by the mining industry, the burning of gasoil and other fossil fuels, and the production of steel and cement was put into effect in January. Natural gas, considered less polluting than other hydrocarbons, is exempt.

But the energy reform that entered into force in December 2013, which opened up the oil industry to foreign investment, threatens compliance with the emissions reduction goals.

The reform is aimed at exploiting more “oil and shale gas, which would increase greenhouse gases…something that contradicts the climate change law, which seeks to minimise them,” Estrada said.

“The reform is a risk…if we start to exploit unconventional hydrocarbons like shale gas,” Tornel said.

“But it creates a window of opportunity, because it opens up competition in the generation and distribution of electricity so renewable energy sources can start to compete,” he added.

However, this “is possible only if the government generates incentives for those sources to become more competitive,” he said.

Mexico’s target is for 35 percent of the electricity generated in 2024 to come from clean sources. Nuclear energy and hydropower dams currently account for 17 percent of the total.

To comply with the climate change law, the government must present an evaluation of adaptation and mitigation policies in October.

But the process for selecting the non-governmental members of the team charged with that task, who will come from the scientific, academic, technical and industrial communities, did not get underway until Apr. 4.