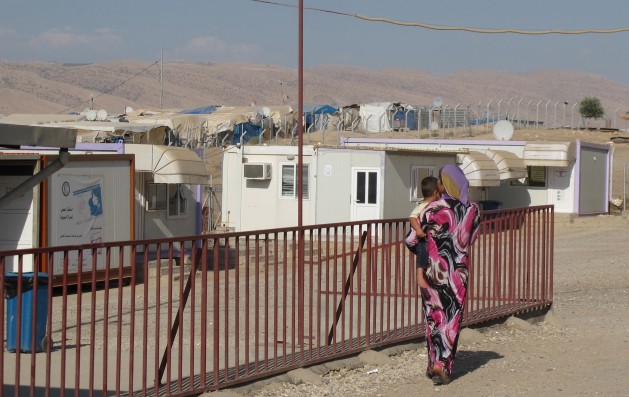 The number of registered Syrian refugees surpassed 3 million in late August, with the highest concentrations in Lebanon (over 1.1 million), Turkey (over 800,000), and Jordan (over 600,000). In all of the above, serious concerns have been expressed about the availability of healthcare services for expectant mothers.

In Lebanon, for example – which hosts the largest number of Syrian refugees, 76 percent of whom are women and children – the U.N. refugee agency (UNHCR) last year had to reduce its coverage of delivery costs for mothers to 75 percent instead of 100 percent, due to funding shortfalls.

Though some in the Domiz camp live in tents on the edges of the camp with little access to basic sanitation facilities, others reside in small container-like facilities interspersed with wedding apparel shops and small groceries, and enjoy the right to public healthcare

The Domiz camp in the northern Dohuk province houses over 100,000 mostly Syrian Kurds, but is in a geographical area with a 189 percent coverage rate of humanitarian aid funding requests in 2014. The Syria Humanitarian Response Plan (SHARP) has received only 33 percent of the same.

Though some in the Domiz camp live in tents on the edges of the camp with little access to basic sanitation facilities, others reside in small container-like facilities interspersed with wedding apparel shops and small groceries, and enjoy the right to public healthcare.

This does not necessarily equate with quality healthcare, however. Halat Yousef, a young mother that IPS spoke to in Domiz, said that she had been told after a previous birth in Syria that she would need a caesarean section for any subsequent births.

On her arrival at the Dohuk public hospital, she was instead refused a bed, told to come back in a week and that she would have to give birth normally. They also told her she had hepatitis.

Fortunately, she said, her husband realised the seriousness of the situation and took her to the capital, where they immediately performed a C-section and found that she was instead negative for hepatitis. IPS met her as she was leaving healthcare facilities set up in the camp, holding her healthy 10-day-old infant.

Until recently, many mothers would also simply give birth in their tents. On August 4, Médicins San Frontiéres (MSF) opened a maternity unit in the camp that offers ante-natal check-ups, birthing services headed by MSF-trained midwives and post-natal vaccinations provided by staff who are also refugees.

Information on breastfeeding and family planning advice is also provided, according to MSF’s medical team leader in the camp, Dr Adrian Guadarrama.

MSF estimates that 2,100 infants are born in the camp every year, and others to refugees living outside of it.

The United Nations Population Fund (UNFPA) has long been providing safe delivery kits to healthcare providers. It also works to prevent unwanted pregnancies and provides contraceptives to those requesting them, thereby ensuring that pregnancies are planned, wanted and safer.

The clean delivery kits contain a bar of soap, a clear plastic sheet for the woman to lie on, a razor blade for cutting the umbilical cord, a sterilised umbilical cord tie, a cloth (to keep the mother and baby warm) and latex gloves.

UNFPA humanitarian coordinator Wael Hatahet told IPS that so far the programmes in Iraqi Kurdistan for Syrian refugees had received enough funding to cover the necessary services, and this was why ‘’the situation is no longer an emergency one for Syrians here’’.

Hatahet said that he gives a good deal of credit to the Kurdistan Regional Government (KRG), which – despite having seen a major cut in public funds from the central government as part of a prolonged tug-of-war between the two – continues to support Syrian refugees coming primarily from the fellow Kurdish regions across the border.

Many residents expressed dissatisfaction to IPS about what they considered ‘’privileged treatment’’ given to Syrian refugees while the massive influx of internally displaced persons (IDPs) that have arrived in the region over the past few months – after the Islamic State (IS) extremist group took over vast swathes of Iraqi territory in June – are seen to be suffering a great deal more.

Even Hatahet, who is of Syrian origins himself, noted that he had seen ‘’Iraqi IDPs wearing the same set of clothes for the past 15 days’’.

‘’We obviously try to support with garments and dignity kits,’’ he said, ‘’but it’s really, really sad.’’

However, he also noted that ‘’almost all the IDP operations are supported by the Saudi Fund [for Development]’’ totalling some 500 million dollars and announced in summer, ‘’which was strictly for IDPs and not refugees.’’

Hatahet expressed concerns that a broader shift in focus to Iraqi IDPs might result in a loss of the gains made in this geographical area of the Syrian refugee crisis, urging the international community to remember that ‘’we have 100,000 refugees scattered within the host community’’ and not just in the camps.

The Turkish office of UNFPA told IPS that, in its area of operations, ‘’it is estimated that about 1.3 million Syrian refugees have entered Turkey, of which only one-fifth of them are staying in camps due to limited space. 75 percent of the refugees are women and children under 18 years old.’’

It pointed out that ‘’women and girls of reproductive age under conditions of war and displacement are especially vulnerable to gender-based violence, including sexual violence, early and forced marriage, high-risk pregnancies, unsafe abortions, risky deliveries, lack of family planning services and commodities and sexually transmitted diseases.’’