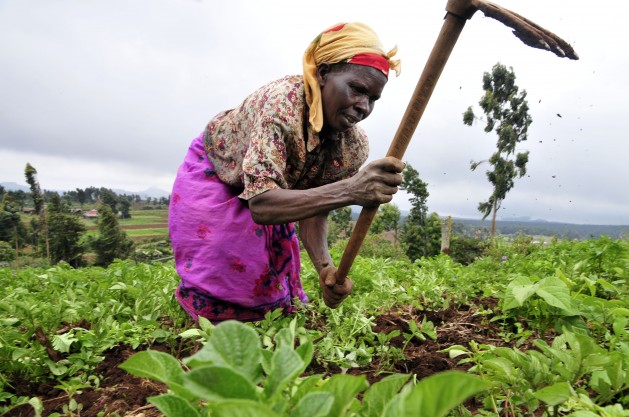 "Who is more concerned than the rural family with regards to preservation of natural resources for future generations?" – Pope Francis. Credit: By CIAT [CC-BY-SA-2.0] via Wikimedia Commons

ROME, Oct 17 2014 (IPS) - “Who is more concerned than the rural family with regards to preservation of natural resources for future generations?”

Pope Francis posed the question in a message read by Archbishop Luigi Travaglino, Permanent Observer of the Holy See for the celebration of World Food Day on Oct. 16 at the headquarters of the U.N. Food and Agriculture Organisation (FAO).

The Pope’s message went to the heart of this year’s World Food Day theme – Family Farming: Feeding the Planet, Caring for the Earth – as part of the International Year of Family Farming (IYFF).

The celebration of World Food Day offered an opportunity to share experiences and steps forward towards the eradication of hunger in a way that is sustainable for the future.

“Family farming is key in this effort”, said FAO Director-General José Graziano Da Silva, praising the contributions of farmers around the world. “For decades they were seen as a problem to be dealt with. The truth is that they are an important part of the solution to sustainable food security.”

"For decades they [family farmers] were seen as a problem to be dealt with. The truth is that they are an important part of the solution to sustainable food security" – FAO Director-General José Graziano Da Silva

Food insecurity within the context of a growing world population, increasingly disruptive climate change and environmental destruction, scarce access to land and resources, discrimination against women and lack of financial support for smallholders and youth were some of the problems that were recognised as crucial in the global struggle to feed all.

FAO figures show that increasing production is not the silver bullet – the world already produces 40 percent more than is needed.

Leslie Lipper, Senior Environmental Economist at FAO’s Economic and Social Department, raised the problem of access: “Today there is enough food in the world for everybody to be food secure, and we still have over 809 million people that are food insecure.”

“They don’t have the means to either buy or in some way get the food they need. We are looking at the need for an agriculture world strategy that increases income, not just production”, she added.

From a social perspective, Giuseppe Castiglione, Undersecretary at the Italian Ministry of Agriculture, Food and Forestry Policy, highlighted the role of family farmers in terms of employment and social inclusion, saying that they offer the opportunity of involving vulnerable people in a familiar working environment that is more welcoming than other forms of employment.

The International Year of Family Farming has been a demonstration of what the United Nations system does well: gathering people, starting dialogue, creating platforms for discussion, raising awareness and sharing knowledge.

In this context, many speakers called for policy-makers to follow up and implement strategies that permit the creation of supporting infrastructures. In fact, farmers’ challenges include distributing food efficiently, gaining access to markets and financial investments, reducing waste and improving quality.

“Financial services enable farmers to generate income and insulate themselves from income shocks”, said Queen Máxima of the Netherlands, the U.N. Secretary-General’s Special Advocate for Inclusive Finance for Development.

“Even a small amount of savings can mean that a mother does not have to sell her chickens or other income-earning assets in order to pay a doctor’s fee,” she added.

The crucial role of women as the backbone of agricultural production was not forgotten, and every speaker called for recognition of their role and for gender equality.

Santiago Del Solar Dorrego, Argentine agronomist and former president of a farmer group, suggested that while innovation is crucial, farmers should not go down that path alone if they do not have the scale to absorb the shock of failure. “Go together,” he said.

Jorge Anrango, responsible for food in rural and indigenous communities in the Ecuador delegation to FAO, talked to IPS about the experience of his country. “Everybody wanted to study, study, study. Nobody wanted to cultivate land”, he said, explaining that the IYFF has raised awareness of the importance of farming and has spurred people to return to the fields.

John Kufuor, former President of Ghana, highlighted the need for political leadership in policy-making for agriculture. He said that the 30 percent increase in rice production in his country had been made possible through offering landless people, women and youth degraded but usable land plots.

By providing them with access to training, markets and services, it had been possible to involve them in a system of plantation development and profit sharing and this programme had created jobs and improved income, food security and nutrition.

In a reference to the recent natural disasters that have hit the host country, Carlo Petrini, founder of Slow Food, a movement promoting local food systems, said that the floods and landslides that affected parts of northern Italy earlier in the month were the result of terrible hydrogeological conditions.

This, he explained, was because while family farmers used to clean canals and rivers and to ensure that the land was looked after, their role had been weakened, negatively affecting the public service they had once provided.