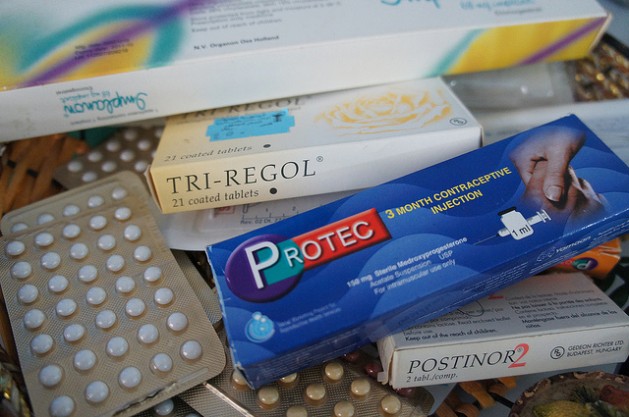 Contraceptives on sale at a store in Sanaa, Yemen. Credit: Rebecca Murray/IPS

NEW YORK, Oct 1 2014 (IPS) - For most of human history, reproductive rights essentially meant men and women accepting the number, timing and spacing of their children, as well as possible childlessness. All this changed radically in the second half of the 20th century with the introduction of new medical technologies aimed at both preventing and assisting human reproduction.

Those technologies ushered in historic changes in reproductive rights and behaviour that continue to reverberate around the world, giving rise to increasingly complex theological, ethical and legal concerns that need to be addressed.

New reproductive technologies have given rise to serious theological, ethical and legal concerns that have not been satisfactorily addressed.

Up until around the middle of the past century, reproductive rights were limited. The available birth control methods were rhythm, coitus interruptus (withdrawal), condoms and for some, the diaphragm.

Those methods in too many instances were unreliable and not considered user friendly. Also, while induced abortion has been practiced for ages, it was a drastic, dangerous and largely unlawful medical procedure.

In 1960, the oral contraceptive pill was introduced, dramatically transforming women’s reproductive rights and behaviour. In addition to the pill, modern methods of family planning, including the intra uterine device (IUD), injectables, implants, emergency contraceptive pills and sterilisation, have given women and men effective control over procreation.

Modern contraceptives have contributed to major changes in sexual behaviour and marriage. Women empowered with modern contraception can choose without the fear of pregnancy whether to have sexual relationships, enabling them to postpone childbearing or avoid it altogether.

And instead of marriage, cohabitation has become increasingly prevalent among many young couples, especially in industrialised countries.

The use of modern contraceptives also facilitated a rapid decline in family size worldwide. Between 1950 and the close of the 20th century, the world’s total fertility rate fell from five children per woman to nearly half that level.

Every major region of the world experienced fertility declines during that half century, with the greatest occurring in Asia and Latin America and the smallest in Africa.

Also at the 1994 International Conference on Population and Development (ICPD), 179 governments indicated their commitment to prevent unsafe abortion and in circumstances where abortion is not against the law, such abortion should be made safe.

Reproductive rights to terminate a pregnancy, however, have also led to excess female fetus abortions. Particularly widespread in China and India, their sex ratios at birth of 117 and 111 boys per 100 girls are blatantly higher than the typical sex ratio at birth of around 106.

Consequently, the numbers of young “surplus males” unable to find brides are more than 35 million in China and 25 million in India.

The introduction in 1970 of in vitro fertilisation (IVF) – fertilisation in a laboratory by mixing sperm with eggs surgically removed from an ovary followed by uterine implantation – radically altered the basic evolutionary process of human reproduction.

IVF provides childless couples the right and means to have biological children. It is estimated that more than five million IVF babies have followed since the birth of the first “test-tube baby” in 1978.

However, IVF has also raised ethical concerns. In addition to creating a pregnancy through “artificial” means, IVF has become a massive commercial industry prone to serious abuses and exploitation of vulnerable couples in the desire to make profits from childbearing.

While those who are childless have a right to have biological children, gestational surrogacy raises challenging ethical questions, such as the exploitation of poor women, as well as complex legal issues, especially when transactions cross international borders.

In 1997, the cloning – or propagation by self-replication rather than through sexual reproduction – of the first mammal, Dolly the sheep, was achieved. The birth of Dolly was a major reproductive development.

Following the cloning of Dolly, scores of other animals, including fish, mice, cows, horses, dogs and monkeys, have been successfully cloned. These developments suggest that in the near future some humans may wish to assert their reproductive rights to be cloned, again raising serious theological, ethical and legal questions.

Among the transhumanist reproductive technologies imagined in the more distant future, one that stands out is ectogenesis, or the development of a fetus outside the human womb in an artificial uterus.

While ectogenesis may expand the extent of fetal viability, free women from childbearing and expand reproductive rights, it poses serious, unexplored medical, ethical and legal issues.

During the past half-century remarkable technological progress has been made in human reproduction. As a result of this medical progress, women and men have acquired wide-ranging reproductive rights and technologies to determine the number, timing and spacing of their children and to overcome childlessness with biological offspring.

The new reproductive technologies, however, have also given rise to serious theological, ethical and legal concerns that have not been satisfactorily addressed. Anticipated future medical breakthroughs in human reproduction make it even more imperative for the international community of nations to address the growing challenges and concerns regarding reproductive technologies and rights.