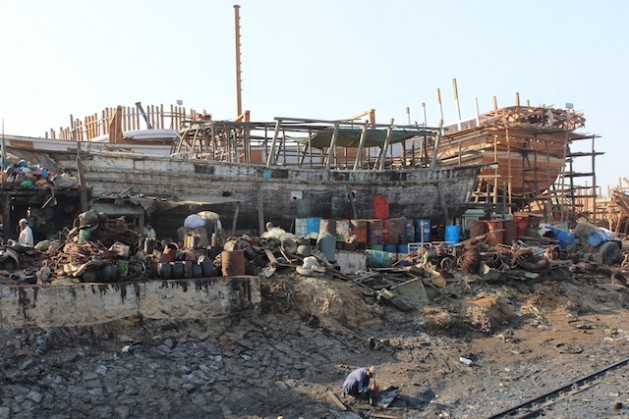 According to the World Wide Fund for Nature (WWF)-Pakistan, nearly 400 million gallons per day of untreated waste from Karachi goes into the sea, making a fisherman’s job an extremely dirty one. Credit: Zofeen Ebrahim/IPS

KARACHI, Nov 4 2014 (IPS) - If you want to know what ‘sea traffic’ looks like, just go down to the Karachi Harbour. Built in 1959, the dockyard houses close to 2,000 big and small boats anchored in the grey sludge at the edge of Pakistan’s southern port city, which opens into the Arabian Sea.

Life on the jetty, an all-male domain, is anything but dull. The air is thick with the smell of fish. With anywhere from 100,000 to 150,000 men working here on a given day, mornings are crowded and noisy with vendors auctioning and buyers inspecting the catch.

Loading and unloading of goods continues uninterrupted well into the afternoon; boats are being geared up for the voyage – rations are inspected, fuel, water and ice are stocked, last minute checks of the nets, the ropes and the engines are underway. 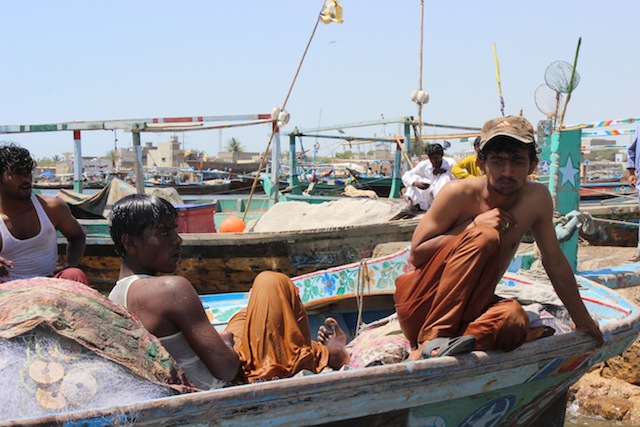 Fishermen operating off the Karachi Harbour in southern Pakistan can earn up to 15,000 rupees (about 145 dollars) per month, but their income is dependent on their catch. As a result, many fisher families live in poverty. Credit: Zofeen Ebrahim/IPS

At one end of the harbour, mammoth-sized wooden arks lie in various stages of completion. Close by, fishing nets are being newly woven or repaired. A medium-sized boat (45 to 55 feet in length) carries anywhere from 20 to 25 fisherman; they go deep into the sea for a maximum of a month.

The income fluctuates – if the catch is good each fisherman can earn as much as 15,000 rupees (about 145 dollars) that month, but there is no fixed salary. These men only get a percentage based on their haul. There is a ban imposed by the government during the months of June and July because it is the best season for prawns, the mainstay of the fishery industry here in Pakistan. 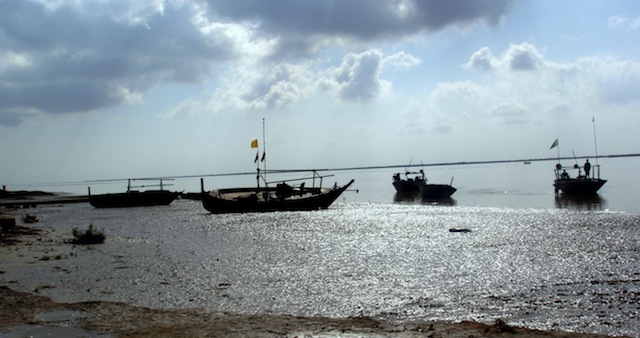 Every day some 2,000 boats jostle for space in the murky waters of one of Pakistan’s oldest harbours. Credit: Zofeen Ebrahim/IPS

The Exclusive Economic Zone (EEZ) covers an area of about 240,000 sq km and the maritime zone of Pakistan, including the continental shelf, extends up to 350 nautical miles from the coastline.

Thus the country has the potential to become a major producer of seafood, not only for local consumption but for the global market as well. Currently, nearly 400,000 people are directly engaged in fishing in Pakistan and another 600,000 in the ancillary industries. 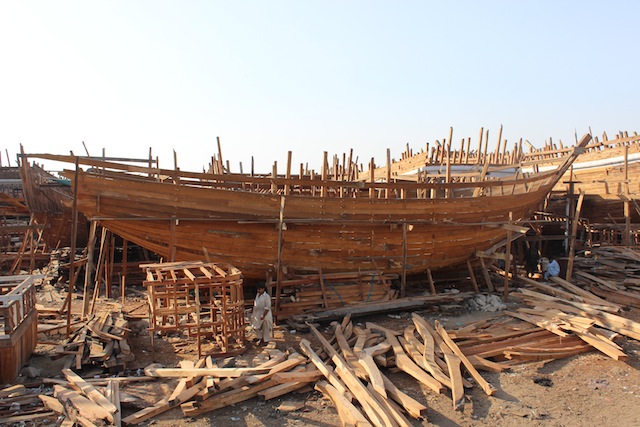 A fisherman walks in front of one of the many half-constructed wooden arks that lie strewn about the Karachi harbour. Credit: Zofeen Ebrahim/IPS

However, an industry that can earn valuable foreign exchange and create a huge job market contributes a dismal one percent to Pakistan’s GDP, with annual exports touching just 367 million dollars in 2013-2014, primarily to countries like China, the United Arab Emirates (UAE), Thailand, Saudi Arabia, Malaysia, Indonesia and Korea.

The average annual catch is almost 600,000 metric tons of more than 200 commercially important fish and shellfish species, found in and around the Karachi Harbour. 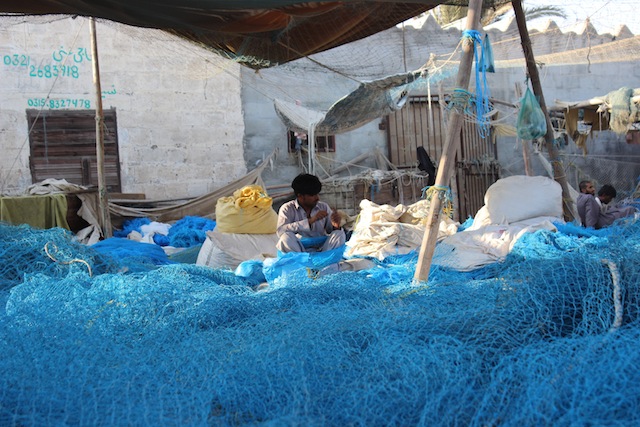 “This includes the catch from other harbours, even from Balochistan [located on the south-western coast], all of which comes here to be sold inland or exported,” says Sagheer Ahmed, spokesperson for the Karachi Fisheries Harbour Authority (KFHA).

One way to increase the role of fisheries in national GDP, says Muhammad Moazzam Khan, ex-director general of the Marine Fisheries Department, is to put a stop to over-exploitation of fish stocks. 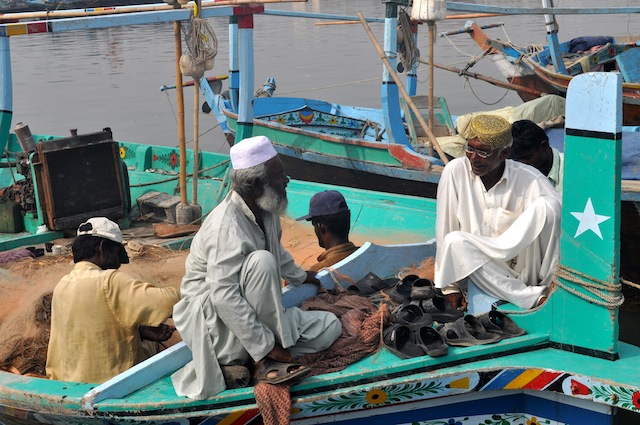 What was once an indigenous occupation, small fishermen say, has turned into a greedy enterprise, resulting in overharvesting of marine resources.

Kamal Shah, spokesperson for the Pakistan Fisherfolk Forum, a non-governmental organisation working for the rights of the local fishing community, says, “The indigenous people know how to recharge the marine life; they respect nature and follow the principles of sustainable livelihood, which seems lost on those who want to get rich quick.” 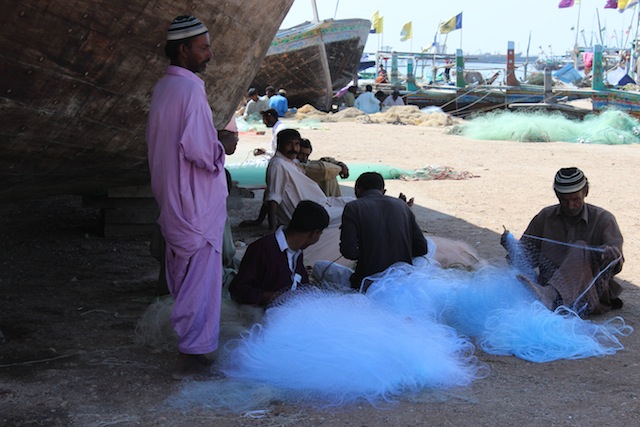 Before heading out to sea, fishermen gather in groups to see to the final details of their voyage: stocking up on food, checking the engines and repairing their nets. Credit: Zofeen Ebrahim/IPS

Khan, currently a technical advisor to the World Wide Fund for Nature (WWF)-Pakistan, worries about extinction of several marine species. He lamented the depletion of shrimp, lobster, croaker, shark and stingrays due to over-exploitation.

“Recovery of these resources is very slow and even if these fisheries are closed down, it would still take decades to restore their stock,” he says. 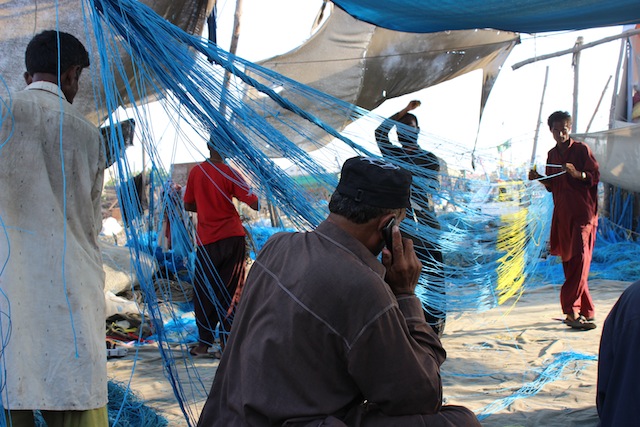 Nearly 400,000 people are directly engaged in fishing in Pakistan and another 600,000 are involved in the ancillary industries according to the Karachi Fisheries Harbour Authority (KFHA). Credit: Zofeen Ebrahim/IPS

Activists, like Shah, say a major problem is the use of illegal (fine mesh) nets that end up catching juvenile fish as opposed to the government-approved nets for deep sea and creek fishing.

These illegal nets literally sieve undersized fish that are economically not viable, but nevertheless important for keeping the marine ecosystem balanced.

Ahmed of the KFHA says Pakistan exported 50 million dollars worth of “trash fish” in the last financial year. “As many as 70 to 100 trucks each loaded with 10,000 kg of trash fish leave the KFHA every day,” he explains. 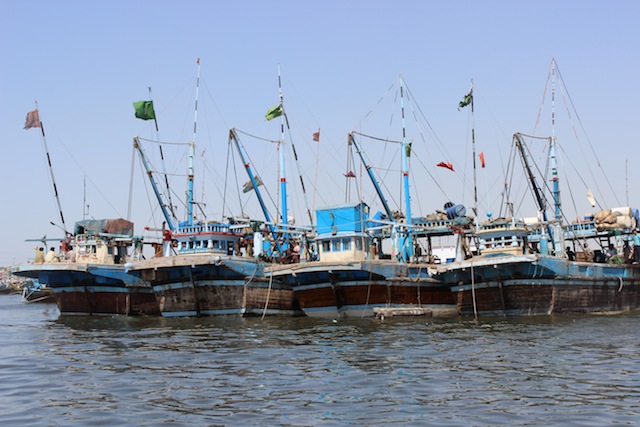 The WWF-Pakistan is worried about the extinction of several marine species. Experts are particularly concerned about the depletion of shrimp, lobster, croaker, shark and stingrays due to over-exploitation. Credit: Zofeen Ebrahim/IPS

Shah also blames the “industrial waste from factories and organic waste from the cattle colony” that goes untreated into the sea. According to the WWF-Pakistan, nearly 400 million gallons per day of untreated waste from Karachi goes into the sea.

But there is some good news for Pakistan’s fishing industry.

After blocking fish exports for six years, last year the European Union (EU) de-listed two of the more than 50 Pakistani companies and this year it is hoped another five will get the green signal. “More than 20 percent of the fish export went to the EU,” according to KFHA’s Ahmed. 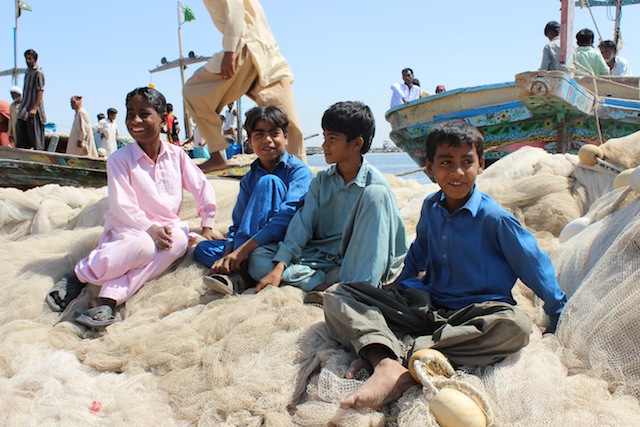 Male children are roped into their father’s occupation very early in life, when they are taken onboard the ships as helpers. Few fisher families send their kids to school. Credit: Zofeen Ebrahim/IPS

An ineffective cold chain and low standards in traceability (tracking the supplier, date and time of transactions) were identified as major issues.

Today nearly 1,000 boats have been modified. Fiberglass cladding in the fish-holds and the increased use of plastic crates have replaced wooden containers. This has also helped maintain the temperature required to keep the catch fresh. 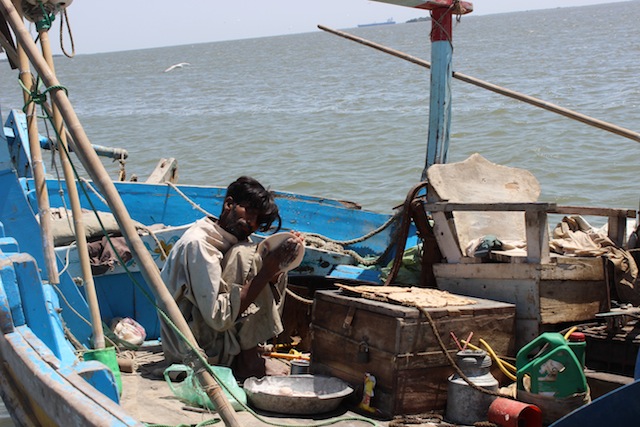 The fishermen perform multiple tasks on the boat. This man makes fresh rotis (flat bread) from whole-meal flour, which the men eat with the fish they catch. Credit: Zofeen Ebrahim/IPS

In addition, processing and packaging factories have started tracking the catch to adhere to the EU’s condition of traceability of the catch.

While Pakistan is slowly reclaiming the EU market and has found its foothold in newer ones, it has a long way to go before establishing itself as a world-class fisheries hub.

Perhaps most importantly it will have to tackle increasing pollution that has decimated some of the most important fishing grounds along the Karachi coast. Similarly, it will have to combat the kind of environmental degradation caused by land reclamation and mangrove denudation, both of which reduce natural levels of productivity along the coast, especially in the Sindh province.