Daniel Balaban*, Director of the WFP Centre of Excellence against Hunger, writes that Brazil’s outstanding performance in reaching the Millennium Development Goals (MDGs) stands it in good stead to play an important role in shaping and achieving the Sustainable Development Goals (SDGs). 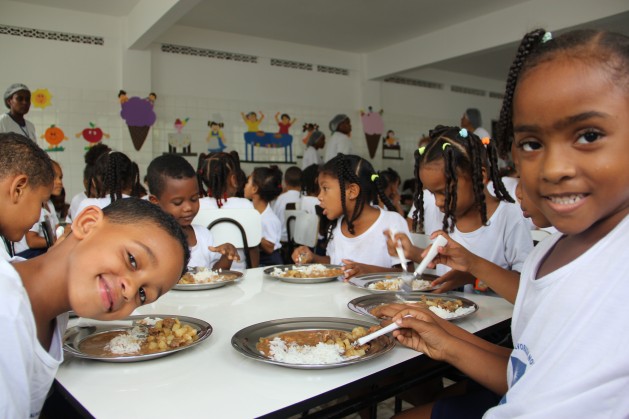 Children having a daily lunch meal at a kindergarten in a poor community in Salvador, Bahia. Brazil's National School Feeding Programme is an example of one of the far-reaching programmes implemented in line with the Millennium Development Goals (MDGs). Credit: Carolina Montenegro/WFP

BRASILIA, Jan 29 2015 (IPS) - With the current Millennium Development Goals (MDGs) expiring at the end of this year to be replaced by the Sustainable Development Goals (SDGs) which will set priorities for the next fifteen years, 2015 will be a crucial year for the future of global development.

As a country with an outstanding performance in reaching the MDGs, Brazil can play an important role in shaping and achieving the SDGs.

Extensive consultations with governments and civil society have been held in recent years, and consensus around many issues has been established and channelled into a series of documents that will now guide the final deliberations on the exact content of the SDGs. September 2015 has been set as deadline for their endorsement by U.N. member states. 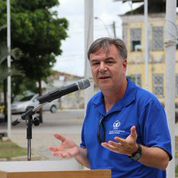 A Working Group has identified 17 goals encompassing issues such as poverty, hunger, education, climate change and access to justice. While some of these topics were already covered by the MDG framework, there is a new set of goals with emphasis on the preservation of natural resources and more sustainable living conditions, meant to reverse contemporary trends of overuse of resources and destruction of ecosystems.

As governments quickly move to adopt the SDGs, they must capitalise on what has been achieved with the MDGs to secure new targets that will go beyond the lowest common denominator.

Brazil has a compelling track record in achieving the current MDGs, and it can use its experience to influence the final negotiations of the SDGs towards ambitious targets.

The country has already reached four of the eight targets – eradication of extreme poverty and hunger, achieving universal primary education, promoting gender equality and combating HIV – and it is likely to achieve the remaining targets by the end of the MDG deadline.

“As governments quickly move to adopt the SDGs, they must capitalise on what has been achieved with the MDGs to secure new targets that will go beyond the lowest common denominator”

Through a set of innovative and coordinated policies, Brazil has tackled these different areas and demonstrated that it is possible to radically decrease poverty and hunger within a decade, giving special attention to the most vulnerable groups.

The National School Feeding Programme, for example, is one of the far-reaching programmes implemented so far. In 2009, the existing policy was upgraded to recognise school feeding as a right, whereby all students of public schools are entitled to adequate and healthy meals, prepared by nutritionists and in accordance with local traditions.

At least 30 percent of the food used to prepare these meals must be procured from local producers, with incentives to the purchase of organic produce.

Another feature of the policy is the participation of civil society through local school feeding councils, which oversee the implementation of the programme, as well as financial reports produced by municipalities.

Altogether, the programme tackles a wide range of issues, combining action to combat hunger, ensure adequate nutrition (including of the most vulnerable groups), support local farmers and involve civil society, in line with principles of inclusion, equity and sustainability, which are also guiding principles of the future SDGs.

It is a good example of how the incorporation of innovative features to existing policies can result in more inclusion and sustainability while optimising resources.

As it occupies a more prominent role on the world stage, Brazil has been active in promoting such policies in multilateral fora, in addition to investing in South-South cooperation to assist countries to achieve similar advances.

The WFP Centre of Excellence against Hunger is the result of such engagement. In the past three years, the Centre been supporting over 30 countries to learn from the Brazilian experience in combating hunger and poverty.

Brazil is now in a position to showcase tangible initiatives during the SDGs negotiations to prove that through strong political commitment it is possible to build programmes with impact on a range of areas.

Such multi-sectorial action and articulation will be required if countries around the globe are determined to tackle humanity’s most urgent needs related to hunger, adequate living standards for excluded populations, and development, while reversing the trend of climate change and unsustainable use of natural resources.

The world is at a crossroads for ensuring sustainability. If the right choices are not made now, future generations will pay the price. However daunting the task may be, this is the moment to do it.

* Daniel Balaban, an economist, is the Director of World Food Programme’s (WFP) Centre of Excellence against Hunger. He has also led the Brazilian national school feeding programme as President of the National Fund for Education Development (FNDE), which feeds 47 million children in school each year. In 2003, he served as the Special Advisor to the Secretary of the Council of Economic and Social Development under the Presidency of the Federative Republic of Brazil.