In this column Emma Bonino, a leading member of the Radical Party, former European Commissioner and a former Italian foreign minister, argues that serious problems affecting Europe, like the Greek crisis and waves of migration, could have been addressed more quickly and efficiently if the European Union had embraced federalism.

ROME, Jul 24 2015 (IPS) - “A serious political and social crisis will sweep through the euro countries if they do not decide to strengthen the integration of their economies. The euro zone crisis did not begin with the Greek crisis, but was manifested much earlier, when a monetary union was created without economic and fiscal union in the context of a financial sector drugged on debt and speculation.” 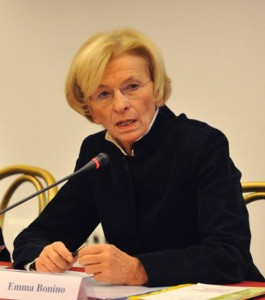 These words, which are completely relevant today, were written by a group of federalists, including Romano Prodi, Giuliano Amato, Jacques Attali, Daniel Cohn-Bendit and this author, in May 2012.

Those with a federalist vision are not surprised that the crisis in Greece has dragged on for so many years, because they know that a really integrated Europe with a truly central bank would have been able to solve it in a relatively short time and at much lower cost.

In this region of 500 million people, another example of the inability to solve European problems was the recent great challenge of distributing 60,000 refugees among the 28 member countries of the European Union. Leaders spent all night exchanging insults without reaching a solution.

Unless the federalist programme – namely, the gradual conversion of the present European Union into the United States of Europe – is adopted, the region will not really be able to solve crises like those of Greece and migration.

It can be stated that European federalism – which would complete Europe’s unity and integration – is now more necessary than ever because it is the appropriate vehicle for overcoming regional crises and starting a new phase of growth, without which Europe will be left behind and subordinated not only to the United States but also to the major emerging powers.

“Unless the federalist programme – namely, the gradual conversion of the present European Union into the United States of Europe – is adopted, the region will not really be able to solve crises like those of Greece and migration”

Furthermore, its serious and growing social problems – such as poverty, inequality and high unemployment especially among young people – will not be solved.

Within the federalist framework there is, at present, only the euro, while all the other institutions or sectoral policies (like defence, foreign policy, and so on) are lacking.

Excluding such large items of public spending as health care and social security, there are however other government functions which, according to the theory of fiscal federalism (the principle of subsidiarity and common sense), should be allocated to a higher level, that of the European central government.

Among them are, in particular: defence and security, diplomacy and foreign policy (including development and humanitarian aid), border control, large research and development projects, and social and regional redistribution.

Defence and foreign policy are perhaps considered the ultimate bastions of state sovereignty and so are still taboo. However, the progressive loss of influence in international affairs among even the most important European countries is increasingly evident.

To take, for instance, the defence sector: as Nick Witney, former chief executive of the European Defence Agency, has noted: “most European armies are still geared towards all-out warfare on the inner-German border rather than keeping the peace in Chad or supporting security and development in Afghanistan.

“This failure to modernise means that much of the 200 billion euros that Europe spends on defence each year is simply wasted,” and “the EU’s individual Member States, even France and Britain, have lost and will never regain the ability to finance all the necessary new capabilities by themselves.”

It should be noted that precisely because the mission of European military forces has changed so radically, it is nowadays much easier, in principle, to create new armed forces from scratch (personnel, armaments, doctrines and all) instead of persisting in the futile attempt to reconvert existing forces to new missions, while at the same time seeking to improve cooperation between them.

Why should it be possible to create a new currency and a new central bank from scratch, and not a new army?

However, it translates into nearly 130 billion euros, which would automatically make the E.U. armed forces an effective military organisation, surpassed only by that of the United States, and with resources three to five times greater than those available to powers like Russia, China or Japan.

It would also mean saving an estimated 60 to 70 billion euros, or more than half a percentage point of European GDP, compared with the present situation.

Transferring certain government functions from national to European level should not give rise to a net increase in public spending in the whole of the European Union, and could well lead to a net decrease because of economies of scale.

Taking the example of defence, for the same outlay a single organisation is certainly more efficient than 28 separate ones. Moreover, as demonstrated by experiences with the North Atlantic Treaty Organization (NATO) during the Cold War, efforts to coordinate independent military forces always produced disappointing results and parasitic reliance on the wealthier providers of this common good. (END/COLUMNIST SERVICE)