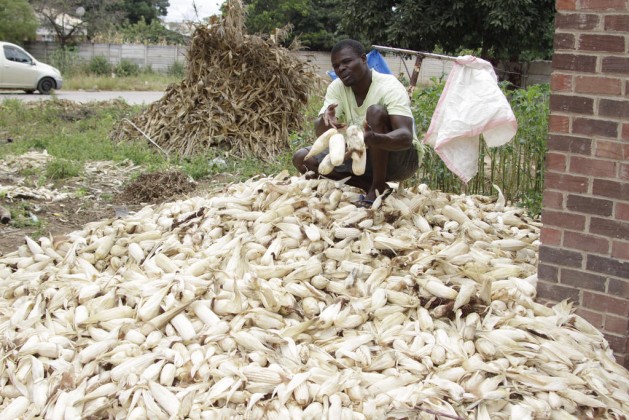 HARARE, Sep 2 2015 (IPS) - There is a scramble for unoccupied land in Africa, but this time it is not British, Portuguese, French or other colonialists racing to occupy the continent’s vacant land – it is the continent’s urban dwellers fast turning to urban farming amid the rampant food shortages that have not spared them.

Inadequate wages have aggravated the situation of many, like Agness Samwenje who lives in Harare’s high density Mufakose suburb, and they have found that turning to urban farming is one way of supplementing their supply of food.

Samwenje, a pre-school teacher who took over an open piece of land to cultivate in vicinity to a farm, told IPS that “this mini-farming here is a back-up means to feed my family because the 200 dollars I earn monthly is not enough to support my family after becoming the breadwinner following the death of my husband four years ago, leaving me to care for our three school-going children.”

“There is increased rural-to-urban migration in Africa as people seek better employment opportunities which, however, they rarely find and subsequently turn to farming on open pieces of land in towns in order for them to survive because they have no money to buy foodstuffs” –Zambian development expert Mulubwa Nakalonga

“I now spend very little money buying food because crops from my small field here in the city supplement my food,” she added.

For others, like jobless 34-year-old Silveira Sinorita from Mozambique who now lives in the Zimbabwean town of Mutare, urban farming has become their job as they battle to feed their families.

“Without employment, I have found that farming here in town is an answer to my food woes at home because I grow my own potatoes, beans, vegetables and fresh maize cobs, whose surplus I then sell,” Sinorita told IPS.

Pushed to the edge by mounting food deficits, urban farmers in other African countries have even gone beyond mere crop farming. In cities such as Kampala in Uganda and Yaoundé in Cameroon, many urban households are raising livestock, including poultry, dairy cattle and pigs.

Urban farming is mushrooming in Africa’s towns and cities at a time the United Nations is urging nations the world over to eradicate extreme poverty and hunger in line with the Millennium Development Goals (MDGs).

According to the Food and Agriculture Organisation (FAO), more than 800 million people around the world practise urban agriculture and it has helped cushion them against rising food costs and insecurity, although the U.N. agency also warns that the number of hungry people has risen to over one billion globally, with the “urban poor being particularly vulnerable.”

However, urban farming in Africa is often met with opposition from the authorities where land is owned by local municipalities and agricultural experts say that opposing it makes no sense in the face of growing food insecurity.

“Poverty is not sparing even people living in the cities because jobs are getting scarce on the continent and as a result, farming in cities is fast becoming a common trend as people battle to supplement their foods, this despite urban farming being prohibited in towns and cities here,” government agricultural officer Norman Hwengwere told IPS. Zimbabwe’s local authority by-laws prohibit farming on vacant municipal land.

FAO has also reported that Africa’s market gardens are the most threatened by the continent’s growth spurt because they are typically not regulated or supported by governments, and a recent study has called for governments to become more involved.

In a 2011 research study titled ‘Growing Potential: Africa’s Urban Farmers’, Anna Plyushteva, a PhD student at University College London, argues that greater government involvement is needed for urban agriculture to emerge out of marginality and illegality and deliver greater environmental and social benefits.

“Without official regulation, urban farming can create some serious problems. At present, informal farmers and their produce are exposed to contamination with organic and non-organic pollutants, which is a serious threat to public health,” said Plyushteva.

For independent Zambian development expert Mulubwa Nakalonga, the more people flock to cities, the more pressure they add to the limited resources there.

“There is increased rural-to-urban migration in Africa as people seek better employment opportunities which, however, they rarely find and subsequently turn to farming on open pieces of land in towns in order for them to survive because they have no money to buy foodstuffs,” Nakalonga told IPS.

“Often when people migrate from rural areas anywhere here in Africa, they cling to their agricultural heritage of practices through urban agriculture which you see many practising in towns today to evade hunger,” Nakalonga added.

In the Tanzanian capital of Dar es Salaam, for example, urban gardens in some communities resemble those found in the country’s rural areas from which people migrated.

Despite the opposition elsewhere, some African cities are nevertheless supporting the urban farming trend. The Cape Town local authority in South Africa, for example, introduced its first urban agriculture policy document in 2007, focusing on the importance of urban agriculture for poverty alleviation and job creation.

As FAO projects that there will be 35 million urban farmers in Africa by 2020, it is supporting programmes in some countries to capitalise on the benefits. In the Democratic Republic of Congo (DRC), for example, FAO’s Urban Horticulture Programme is building on the skills of rural farmers who have come to the cities.

The FAO programme in DRC started in response to the country’s massive rural-to-urban exodus following a five-year conflict and now helps local urban farmers to produce 330,000 tons of vegetables each year, while providing employment and income for 16,000 small-scale market gardeners in the country’s towns and cities.

The country’s urban farmers sell 90 percent of what they produce in urban markets and supermarkets, according to FAO, helping to feed a swelling urban population as Congolese flee the countryside in search of security.

Meanwhile, in the Kenyan capital Nairobi, various groups and agencies have helped popularise the “vertical farm in a bag” concept in which city dwellers create their own gardens using tall sacks filled with soil from which plant life grows.

With hunger hitting both rural and urban African dwellers hard, an increasing number of them believe that urban farming is the way to go.