By Busani Bafana
The world can satisfy its growing appetite for meat and animal-based products without upsetting livelihoods, especially of developing country farmers, or worsening climate change.

By Thalif Deen
Since its founding in 2007 to help developing nations fight poverty, hunger, illiteracy, disease and gender discrimination, the Millennium Development Goals Achievement Fund (MDG-F) has financed about 130 joint programmes in 50 countries.

By Mantoe Phakathi
The overcast sky is a sign that it might rain, and Happy Shongwe, a smallholder farmer from rural Maphungwane in eastern Swaziland, is not exactly happy.

By Thalif Deen
With less than three years before a 2015 deadline, the developing world is largely expected to miss one of the U.N.'s key Millennium Development Goals (MDGs): halving the number of people living in extreme poverty and hunger.
« Previous Page — Next Page » 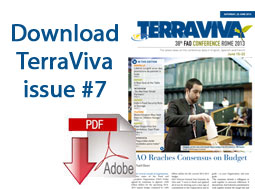