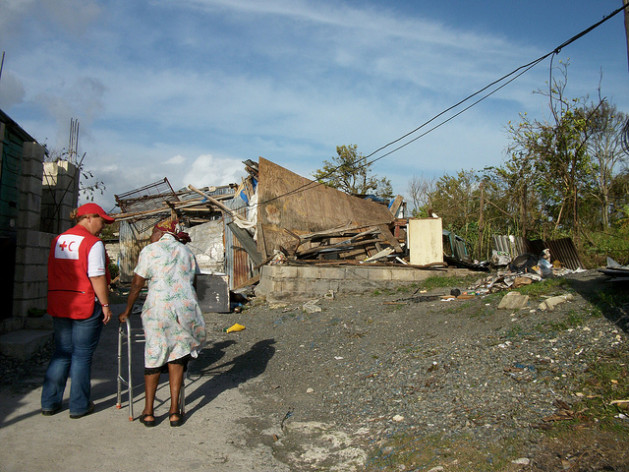 After Hurricane Sandy struck Jamaica a year ago, critics say the country's recovery was hampered by the IMF budget. Credit: European Commission/cc by 2.0

UNITED NATIONS, Nov 18 2013 (IPS) - On May 23, shortly after wrapping up negotiations on the International Monetary Fund’s (IMF) 958- million-dollar loan – its second in three years – to keep Jamaica out of default, the fund’s mission chief in the country, Jan Kees Martijn, set out to visit Croydon, a former plantation settlement in the mountainous northwest of the island.

Also in Croydon that day was Verene Shepherd, professor of social history at the University of the West Indies and chair of the national reparations commission.

"There’s been a lot of talk about the new IMF... but what they are still pushing is from 15 years ago.” -- Jake Johnston

Shepherd was recording her weekly radio show, “Talking History” – she was marking the anniversary of the hanging of Samuel Sharpe, leader of the slave rebellion of 1831-32 – when she ran into Martijn being led through town by the local chamber of commerce.

The phlegmatic Dutch technocrat listened as Shepherd discussed the brutal history and economic legacy of slavery, one difficult to compute in dollars and cents (though Shepherd has, at 7.5 trillion dollars), but something that many in the region feel should at least footnote every budget shortfall and each emergency loan taken.

“I tried to tell him that you are looking at the end result of colonisation,” Shepherd told IPS. “It’s easy to say ‘you’re independent now, stop complaining’ but it’s very hard to distance what is happening now from the past.”

Though Shepherd was aware that in October Jamaica would be one of 14 Caribbean countries to sue Britain, France and the Netherlands for slavery reparations, she wished Martijn well, and the IMF team continued on to their heritage tour.

Since 1990, there have been 37 debt restructurings in the Caribbean, a problem critics say international bodies like the IMF are woefully unprepared to tackle.

Barbados, Belize, Jamaica, Antigua and Barbuda, Grenada, St. Kitts and Nevis, and St. Lucia all have public debt higher than 80 percent of GDP; in Jamaica the figure is 143.3 percent.

Kicking the Can Down the Road

Under the current IMF agreement, Jamaica is expected to run a primary surplus of 7.5 percent of GDP, higher than all but a few large oil exporters.

Caribbean governments are incentivised to refinance, regardless of terms, because it frees up money to be spent during their term in office.

“It kicks the can down the road,” Hurley said. “It releases money in the short term, and you can say to your people I have an extra 500-600 million to spend on education and health, but the debt remains unchanged.”

In 2010, even the IMF saw a “haircut” – a reduction in the debt’s principal – as desirable, but it was the Jamaican government, wary of short-term repercussions in private sector capital flows, that refused a reduction and chose instead to restructure – altering the maturity and rate alone -only to do so again three years later.

The initial 2010 IMF agreement was eventually nullified by a Jamaican court that ruled the government could no longer withhold back pay to public sector workers, a part of the IMF’s guidance.

Without IMF agreements and the analysis they come with, private investors as well as bilateral and multilateral lenders like the World Bank are reticent to offer their own funding. If they have already, they may freeze funds, a chain of events that occurred following the court’s ruling.

In other countries, time spent planning for the future is in the Caribbean wasted scrambling to pay the bills.

Already this year, bondholders in Belize took 10-20 percent cuts, and in St. Kitts and Nevis, investors have seen 50-percent “haircuts” on their principal.

In a February report, the IMF found that the “main challenges for Caribbean small states looking ahead include low growth, high debt and reducing vulnerabilities from natural disaster.”

Yet even after issuing a mea culpa of sorts for pushing austerity in Europe following the 2008 financial crisis, the IMF turned around and insisted those very policies – ones that led to contractions and unemployment – were the only way out of the Caribbean’s fiscal mess.

Despite successive loans from the IMF, Jamaica still spends around half its budget on interest payments, crippling the country’s ability to provide social services and prepare for natural disasters.

After Hurricane Sandy struck Jamaica one year ago, “they couldn’t repair or prepare for the next one because they were constrained by the IMF budget,” Johnston told IPS.

The IMF said it was unable to comment for this story because a team was currently in the country.

However, holding back spending can lead to a dangerous feedback loop: experts predict that for every dollar a country forgoes today on climate change mitigation, it will spend six or seven on disaster response in a few years’ time.

Media portrayals of the crisis tend to rely on sources in the IMF and investment community and adopt the same terse, tough-love language they favour that serves to distance themselves from people on the ground. Depictions often treat extreme weather and zero-growth economies as if in a vacuum, without interrogating their climactic or historical causes.

A history too quickly forgotten

Caribbean economies were ushered into independence underdeveloped and limited by colonial regimes that favoured primary exports over industrialization.

The 1973 oil price shock forced many to take out dollar-denominated loans to pay for energy.

When interest rates in the U.S. shot up, payments on those loans ballooned and countries in the region had no choice but to accept the structural adjustment that accompanied IMF and World Bank bailouts, a position they’ve been in ever since.

Before, “all the produce was sold and that was money in the pockets of people throughout the island, even in the smallest villages,” Father Sean Doggett, a catholic priest in Grenada, told IPS. “That came to a very sudden stop around 1998.”

Countries turned to tourism, but the recovery from the global financial crisis has been slow and uneven – in Grenada, unemployment doubled between 2008 and 2012.

Doggett and other members of the Grenadian Conference of Churches (COC) sat down with the IMF and the Grenadian government in October, proposing the creation of a “conference of creditors” to negotiate the terms of a two-thirds debt reduction and called on the IMF to attach greater importance to poverty reduction and unemployment.

In 2013, Grenada’s debt payments will amount to over 250 percent of what it spends on education and health.

“There is no way that Grenada can pay off its debt as it stands,” Doggett told IPS.  “We need to get out of this cycle of indebtedness and get on a development path that is more sustainable.”

“Having debt hanging around the neck of people forever and ever is contrary to the biblical concept of Jubilee, of debt forgiveness… this is as much an issue of justice and the building of a better society,” he said.

Though Grenada may one day serve as a model for more inclusive debt forgiveness in poorer countries, Johnston insists an international mechanism to settle sovereign debt disputes is needed.

“Companies go bankrupt, cities go bankrupt but when countries cannot pay their debt they end up being punished for it. It’s clear there is a need internationally and especially for the Caribbean that they have a mechanism to work these things out.”

At the Commonwealth Heads of Government Meeting in Colombo last weekend, countries discussed exploring a debt swap plan that would pay off the principal of heavily indebted countries with money already pledged by wealthier countries to combat climate change.

“In return for having their debt paid, countries would agree to set aside the principal amount into a trust fund to finance climate change mitigation” over 10 to 15 years, Travis Mitchell, economic advisor at the Secretariat, told IPS.

But for Shepherd, all of this misses the point.

“When we are talking to the international community, it’s always what you can do for us,” said Shepherd. “You need to own up to the exploitation and underdevelopment.”

For countries that are responsible for a miniscule portion of greenhouse gas emissions yet suffer the most from climate change, taking the money wouldn’t address the economic and moral offences that saddled them with debt in the first place.

Any payment, Shepherd says, should come as redress, not as a form of charity that lets the developed world clear its conscience.

“When you frame it in the post-2015 agenda and look at the (U.N.) Millennium Development Goals, you realise those aren’t realised without a change of attitude, otherwise you’ll be here talking about the same thing 50 years hence.”