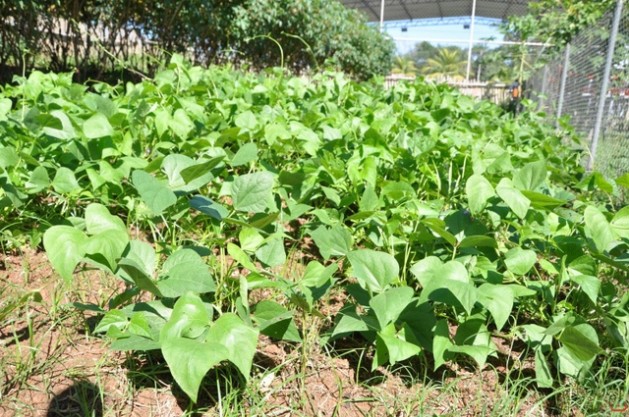 KIGALI, Apr 17 2014 (IPS) - Latin America is one of the regions in the world suffering from “hidden hunger” – a chronic lack of the micronutrients needed to ward off problems like anaemia, blindness, impaired immune systems, and stunted growth.

Brazil is heading up a food biofortification effort in the region to turn this situation around.

Nicaragua, Guatemala and Honduras are targets of the biofortification programme, after six countries in Africa (Democratic Republic of Congo, Ethiopia, Nigeria, Rwanda, Uganda and Zambia) and three in Asia (Bangladesh, India and Pakistan).

Behind the initiative is HarvestPlus, which forms part of the CGIAR Consortium research programme on Agriculture for Nutrition and Health.

CGIAR is an independent consortium leading the global effort to modify food in developing regions by adding essential minerals and vitamins.

In Latin America, the project is led by the Brazilian Biofortification Network (BioFORT), which since 2003 has brought together 150 researchers from EMBRAPA, the Brazilian government’s agricultural research agency, and from universities and specialised centres.

EMBRAPA food engineer Marília Nutti, who heads the BioFORT network in Brazil and the rest of the region, told IPS that the three countries in Latin America with the highest rates of micronutrient deficiency are Haiti, Nicaragua and Guatemala.

HarvestPlus developed a Biofortification Priority Index (BPI) to identify countries in the developing South with the highest levels of micronutrient deficiency.

Agronomist Miguel Lacayo at the Central American University in Managua told IPS that Nicaragua is second only to Haiti in terms of problems in the production and availability of food for a nutritious diet in this region.

An index to measure progress

For the BPI, country data on the prevalence of micronutrient deficiencies and production and consumption levels of target crops is analysed to help guide decisions about where, and in which biofortified crops, to invest for maximum impact.

BPIs are calculated for seven staple crops and for 127 countries in the developing South.

“The diet in Nicaragua is principally made up of maize and beans, which are eaten two to three times a day,” the expert said. “People eat a lot of maize tortillas, accompanied by beans, for breakfast, lunch and dinner.”

Lacayo spoke with IPS during the Mar. 31-Apr. 2 Second Global Conference on Biofortification, organised by HarvestPlus in Kigali, the capital of Rwanda.

“The idea is to increase the concentration of iron and zinc in these two staple foods, to reduce nutrition problems. We want to help bring down anaemia levels,” he said.

Severe nutritional deficits are especially a problem among children in rural areas in Nicaragua, one of the poorest countries in Latin America. “It’s a chronic problem among the rural poor, who make up 60 percent of the population,” Lacayo said.

Biofortification uses conventional plant-breeding methods to enhance the concentration of micronutrients in food crops through a combination of laboratory and agricultural techniques.

The United Nations Food and Agriculture Organisation (FAO) reports that two billion people in the world today suffer from one or more micronutrient deficiencies, and that every four seconds someone dies of hunger and related causes.

In December 2012, the World Bank released a toolkit providing nutrition emergency response guidance to policy-makers, seeking to ensure health, food and nutritional security for vulnerable mothers and their children in Latin America and the Caribbean.

According to the World Bank an estimated 7.2 million children under five are chronically malnourished in the region.

The Bank also warned about the economic costs of malnutrition, estimating individual productivity losses at more than 10 percent of lifetime earnings, and gross domestic product lost to malnutrition as high as two to three percent in many countries.

The World Food Programme (WFP) Hunger Map shows that the malnutrition rate in Nicaragua stands at between 10 and 19 percent, while in Haiti 35 percent of the population is malnourished.

Nicaragua began to biofortify foods in 2005 with support from Agrosalud, a consortium of institutions working in 14 countries of Latin America and the Caribbean that is mainly financed by the Canadian International Development Agency (CIDA).

Of these countries, Panama went on to launch a national biofortification programme, with no outside financing.

The first phase of Agrosalud ended in 2010, and Nicaragua was made a priority target in the second phase, with backing from BioFORT, initially focused on maize and beans.

“We want to support biofortified crops,” Lacayo commented. “We are going to create a network in Nicaragua with HarvestPlus, governments, non-governmental organisations, universities, and national and international bodies.”

The alliance will include 125 researchers from 25 university institutions, and the national plan is to get underway in June, with the aim of promoting food security and sovereignty in Nicaragua.

Lacayo stressed that one element of the plan will be support for small farmers in the production of seeds “for their own consumption, as well as a surplus to sell…We want to give this added value, and to strengthen small rural enterprises.”

The agronomist foresees a lasting alliance with Brazil through EMBRAPA, to help reduce hidden hunger in Nicaragua.

BioFORT’s Nutti said the network has an “innovative focus” of combining nutrition, agriculture and health.

“Biofortification is a new science. The big advantage of the project is that it has brought together agronomists, economists, nutritionists and experts in food sciences behind the common goal of having an impact on health,” she said.

Initially, HarvestPlus asked Brazil only to biofortify cassava. But BioFORT decided it was also necessary to incorporate other micronutrients in seven other foods that are essential to the Brazilian diet: cowpeas, beans, rice, sweet potatoes, maize, squash and wheat.

“This is a very big country. You have to show people that this biofortified diet is better,” Nutti said.

Brazil is one of the HarvestPlus country programmes, because it operates with its own technical resources and is seen as a model in the administration of the biofortification effort.

While in Africa, the main target of the initiative, 40 million dollars will be allocated to biofortification, the budget for Latin America over the next five years will range between 500,000 and one million dollars.

That is not much, considering the magnitude of the task, BioFORT technology researcher José Luis Viana de Carvalho told IPS.

In his view, Brazil has the experience needed to forge alliances that contribute to the development of biofortification in the region.

“Brazil is a granary due to the quantity of cereals it produces and its cutting-edge technology. We should think in terms of a 20-year timeframe for reducing the pockets of hidden hunger,” he added.

He said that in terms of public health, the cost of spending on biofortification is lower than the cost of not undertaking the effort.

“Prevention through quality food is important. Biofortification is not medicine, it is prevention. It is the daily diet,” de Carvalho said.