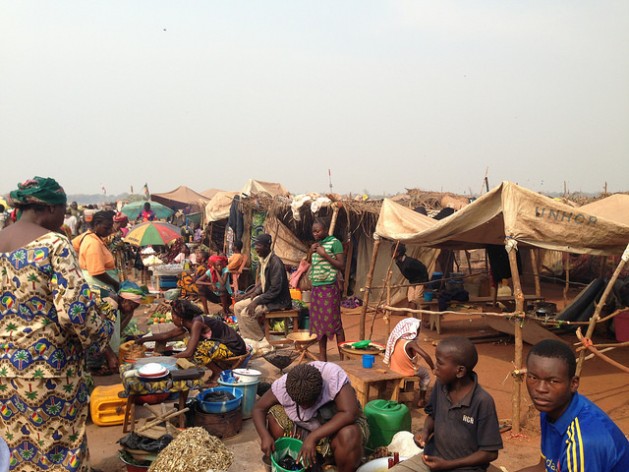 Attacks between Séléka-aligned Muslims and Christian vigilante militias in the Central Africa Republic displaced a quarter of the country’s 4.6 million people and plunged the nation into bloody anarchy. Credit: EU/ECHO/Patrick Lambrechts/ CC by 2.0

ADDIS ABABA, Feb 28 2014 (IPS) - While wrangling over Central African Republic’s (CAR) wealth in natural resources played a role in the country’s crisis, its future peace and stability still partly depends on a solution that factors in how to equitably distribute its national wealth.

“The conflict is multifaceted and does reflect tensions between groups over the control for land and natural resources. Neither side is fighting in the name of god, though paradoxically there is a religious tone that has complicated the crisis,” Comfort Ero, the Africa programme director for the International Crisis Group, told IPS.

"Séléka was in the end a consortium of malcontents...It is to a large extent a fight for political power/control and safe guarding communities..." -- Comfort Ero, International Crisis Group

Violence between Séléka-aligned Muslims and and the anti-balaka Christian vigilante militias has killed two thousand people and displaced a quarter of the country’s four million population since Séléka rebels staged a coup last March.

Although the violence has escalated along religious lines between Muslims and Christians, the conflict’s origins in a political feud between ethnic groups for control over CAR’s resources, including the country’s rich diamond reserves, should not be overlooked, said Ero.

“Séléka was in the end a consortium of malcontents…It is to a large extent a fight for political power/control and safe guarding communities, especially those who have historically felt marginalised,” she said.

The Séléka coalition, whose name means “alliance”, launched a rebellion in 2012 that led to its leader Michael Djotodia seizing power from President Francis Bozizé in March 2013.

Djotodia claimed afterwards that his northern tribespeople — the Gula — felt betrayed after Bozizé requested their support for staging a coup in 2003 and then excluded them from his sphere once in power.

Bozizé proceeded to exploit the country’s wealth for the enrichment of his own ethnic group and family members, which created discontent throughout the country about rampant corruption and nepotism.

Since independence from France in 1960, CAR has suffered five coups and multiple rebellions. Although CAR is rich in diamonds, timber, gold, uranium and oil, the country’s per capita income is only 510 dollars, making the troubled country one of the poorest in Africa.

“Bozizé created major grievances throughout all the country’s ethnic groups about a discrimination of wealth from resources such as diamonds only going to his family and to his tribe — the Gbaya. It was this discrimination that fuelled the Séléka rebellion,” a researcher at the Institute of Security Studies told IPS.

During his presidential reign, 11 members of Bozize’s family held positions in parliament.

A subsequent refusal to distribute the country’s wealth created a climate of marginalisation and disenfranchisement in the north that helped create conditions for an armed rebellion explained Ero.

“His [Bozizé’s] family’s control of the security and finance sector, including state-owned companies, and their stranglehold on the management of public finance, significantly fuelled the crisis in the country,” said Ero.

“By 2012, Chad was openly backing the Séléka and the fact that the Chadian fighters among the rebels fought against the South African military contingent was not entirely unrelated to the fact that Bozizé had given uranium and other mineral concessions to South African firms instead of to Chad, which wanted some of the very same resources Déby sought as part of his quest for regional hegemony,” Peter Pham, director of the Africa Centre at the Atlantic Council, a research institute for U.S. and European policy approaches to Africa, told IPS.

As a response to feeling snubbed, Chad released Séléka leaders into northern CAR, a move that helped to rally Séléka forces and foment a rebellion that led to the overthrow of Bozizé.

“These individuals were and continue to be motivated by a more personal grievance, that they themselves weren’t the ones controlling the resources,” Pham said.

Revenge killings between the Séléka militia and the anti-balaka militia has sidelined the issue of ramping up policing of the country’s warlord-controlled diamond mining industry and created a situation where the precious stones could be funding rebel activity.

“We need to be sure that diamonds are not leaking out of the country, allowing revenues to contribute to the ongoing conflict. The high risk that diamonds may have financed armed groups in CAR stresses once again why transparency is vitally needed in the diamond sector both nationally and internationally,” Alexandra Pardal, a campaign leader at anti-corruption watchdog, Global Witness, told IPS.

There are an estimated 80,000 to 100,000 mostly artisan miners working for middle men who sell the stones to smugglers.

“Séléka’s members and supporters include dissatisfied economic actors, the diamond collectors. One of the demands put forward by Séléka and some rebel commanders was for the ‘unconditional return of diamonds, gold, cash and other goods taken by the government in 2008,’” Ero said.

CAR has been suspended from the Kimberley Process, an international body responsible for halting the trade in conflict-tainted diamonds, due to the military clashes in the country.

A plan for reform and stronger governance of CAR’s resource industry would substantially help break the cycle of armed conflict and also help to democratise the benefits of the country’s major sources of wealth.

“Rebuilding the country’s economy, including protecting the diamond sector — the country’s main export is an immediate priority,” Ero said.