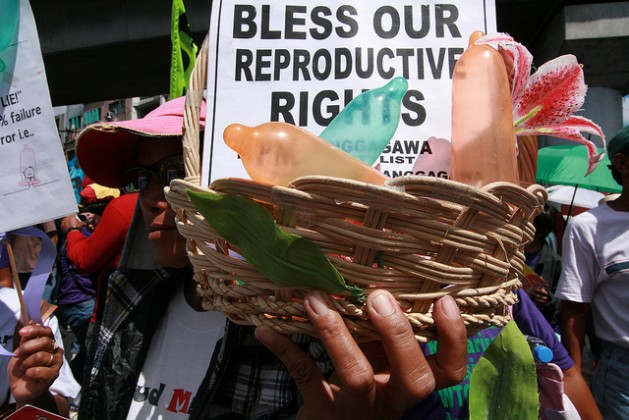 A basket of condoms is passed around during International Women’s Day in Manila. Credit: Kara Santos/IPS

UNITED NATIONS, Jul 10 2014 (IPS) - As the United Nations continues negotiations on a new set of Sustainable Development Goals (SDGs) for its post-2015 development agenda, population experts are hoping reproductive health will be given significant recognition in the final line-up of the goals later this year.

At the same time, an upcoming Special Session of the General Assembly in mid-September may further strengthen reproductive rights and the right to universal family planning.

"Advocates are rallying to ensure that SRHR remains as central to the next set of goals as it is to women's lives." -- Gina Sarfaty

Gina Sarfaty of the Washington-based Population Action International (PAI) told IPS, “We are at a critical juncture for sexual and reproductive health and rights (SRHR).”

As the conversation around the next set of SDGs begins to heat up, she said, “Advocates are rallying to ensure that SRHR remains as central to the next set of goals as it is to women’s lives.

“The stakes are high, and the need for action is paramount,” cautioned Sarfaty, a Geographic Information Systems (GIS) specialist and research associate at PAI.

World population, currently at over 7.2 billion, is projected to increase by 3.7 billion people by 2100. Much of this growth will occur in developing countries, with 64 percent concentrated in just 10 countries, according to PAI.

The remaining two countries accounting for the world’s increase – India and the United States – are those with already large populations and high net migration.

The ongoing negotiations for SDGs take place against the run-up to the upcoming special session of the General Assembly commemorating the 20th anniversary of the 1994 landmark International Conference on Population and Development (ICPD) in Cairo.

The special session, to be attended by several heads of state, is scheduled to take place Sep. 22 during the 69th session of the General Assembly.

Dr. Babatunde Osotimehin, under-secretary-general and executive director of the U.N. Population Fund (UNFPA), told IPS the principles set at the ICPD in 1994 are as relevant today as they were 20 years ago.

“But we need to act strong and fast to realise the Cairo vision and achieve universal access to sexual and reproductive health and reproductive rights, including family planning,” he added.

The special session presents the perfect opportunity for governments, at the highest level, to recommit to its success and to renew their political support for actions required to fully achieve the goals and objectives of its Programme of Action and achieve sustainable development, he said.

This will also place the Cairo principles firmly in the post-2015 development agenda, said Dr. Osotimehin, a former Nigerian minister of health.

Purnima Mane, president and chief executive officer of Pathfinder International, told IPS the September meeting represents an opportunity for world leaders to assess progress made over the past 20 years against the goals and strategies developed in 1994, identify any remaining gaps in performance that require increased attention and investment, and realign their efforts moving forward.

“This is a very important session for all of us working on sexual and reproductive health since it provides a critical forum for reaffirming and unifying international commitment to ICPD goals and for making an added push to do more on areas and in countries where we are lagging,” she said.

Asked why there wasn’t a follow-up international conference, perhaps an ICPD+20 on the lines of the Rio+20 environment conference in 2012, Mane said the Cairo Programme of Action developed a very forward-looking agenda and set the bar high for the international community 20 years ago.

She said its goals are still relevant and actionable, and the agenda is unfortunately not yet finished.

“My sense is that having a follow-up conference in such an environment was seen as neither strategic nor a good use of resources,” Mane said.

The upcoming special session “is intended to heighten focus on the goals established in the 1994 Programme of Action, stimulate discussion around what we will do to complete the unfinished agenda, re-engage on commitments already made and also push for more.

“I would hope the upcoming U.N. session will highlight the need to include sexual and reproductive health and rights upfront as a core component of the Sustainable Development Goals as the Open Working Group continues to develop its proposal,” said Mane, who oversees sexual and reproductive health programmes in more than 20 developing nations on an annual budget of over 100 million dollars.

Asked about the current status of world population growth, PAI’s Sarfaty told IPS that despite the fact that mortality has declined substantially, women in sub-Saharan Africa currently have more than five children on average, representing a modest decrease from the average of 6.5 children they had in the 1950s.

Compared to Latin America and Asia, she said, a slower pace of fertility decline has characterised sub-Saharan Africa, with stalls and even reversals along the way.

Of 22 countries where recent survey data is available, 10 are transitioning towards lower childbearing while 12 are currently experiencing fertility stalls.

“Therefore, the expectation that fertility will steadily decline in Africa, as the U.N. projects, will not hold without concerted policy and programme effort,” she warned.

The polar opposite fertility scenario is happening in the high income countries with low levels of fertility.

It is estimated that 48 percent of the world’s population lives in countries where women have fewer than 2.1 children on average in their lifetimes, she pointed out.

While fertility rates in these countries may be below replacement level, their need for family planning does not disappear, she declared.

In addition to being ineffective, restricting access to family planning also restricts the right of a woman to determine her family size, she added.

Meanwhile, in a report released Thursday, the United Nations said the world’s population is increasingly urban, with more than half living in urban areas today and another 2.5 billion expected by 2050.

The largest urban growth will take place in India, China and Nigeria: three countries accounting for 37 per cent of the projected growth of the world’s urban population between 2014 and 2050.