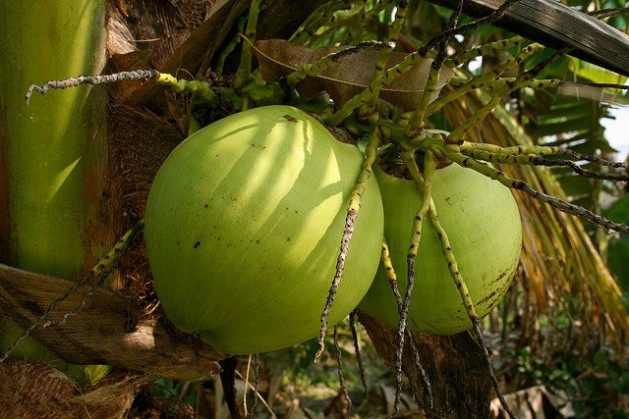 Coconut oil producers in Samoa are benefitting from a scheme to connect local organic farmers with the international market. Credit: Matias Dutto/CC-BY-ND-2.0

SALELOLOGA, Samoa , Sep 17 2014 (IPS) - Rural farming families in Samoa, a small island developing state in the central South Pacific Ocean, are reaping the rewards of supplying produce to the international organic market with the help of a local women’s business organisation.

“In Samoa, we are a very blessed nation, most people have their own piece of land and we have the sea,” Kalais-Jade Stanley, programme manager for Women in Business Development Inc (WIBDI), a Samoan non-government organisation dedicated to developing village economies, told IPS.

With the resources to grow food and the social safety net provided by traditional kinship obligations, people rarely go hungry. According to the World Bank, Samoa has one of the lowest food hardship rates in the region at 1.1 percent, compared to 4.5 percent in Fiji and 26.5 percent in Papua New Guinea.

Women in Business Development Inc (WIBDI) is working with 1,200 farming families and 600 certified organic farmers across the country, generating local incomes totalling more than 253,800 dollars per year.
But Stanley says many rural families experience a lack of economic opportunity, such as “not being able to access markets” and being “unaware of what they could potentially access” to make their livelihoods more resilient.

In Gataivai, a village of 1,400 people on Savaii, the largest island in Samoa, Faaolasa Toilolo Sione has worked the land for 40 years. Here approximately one quarter of the country’s population of 190,372 support themselves mainly by subsistence and smallholder agriculture.

In the island’s rich volcanic soil Sione grows taro, yams, bananas, cocoa and coconuts. He sells these crops at a market in the nearby town of Salelologa and from a stall located on the roadside in front of his home.

But his livelihood significantly prospered after he began working with WIBDI in 2012 to produce certified organic virgin coconut oil for international buyers.

Now Sione employs four to five workers in the organic oil-processing site on his farm, which is adding value to his coconut harvest. He produces 80 buckets, each 19 litres, of coconut oil per month, which brings in a monthly income of about 12,000 tala (5,076 dollars).

“Organic farming is not easy, but there are a lot of benefits,” Sione said. “I have more knowledge about good farming practices and a regular weekly income, which helps send the children to school and support my extended family.”

He has also purchased water tanks for the family and a new truck to transport produce. Transportation can be a major challenge for farmers. Those who don’t own vehicles frequently rely on public bus services to take their wares to buyers across the island or in the capital.

An estimated 68 percent of Samoan households are engaged in agriculture and WIBDI, which understands rural vulnerability to environmental extremes and economic barriers in the Pacific Islands, wants to see many more achieve Sione’s success.

Samoa’s economy is limited by the geographical challenges of being a small island state situated far from main markets. Located in a tropical climate zone and near the Pacific Ring of Fire, the country is also highly exposed to natural disasters.

Multiple shocks in the past 20 years, including numerous severe cyclones since the 1990s, an earthquake and tsunami in 2009, the 2008 global financial crisis and the destructive taro leaf blight pest took their toll on the agricultural sector. As a result, its contribution to the economy almost halved from 19 percent to 10 percent in the decade ending in 2009.

According to a government report prepared for the Third International Conference on Small Island Developing States (SIDS), “Raising the quality of life for all in all sectors of the economy remains the most significant challenge” for the small Polynesian state of Samoa.

WIBDI, which aims to be part of the solution, is working with 1,200 farming families and 600 certified organic farmers across the country, generating local incomes totalling more than 600,000 tala (253,800 dollars) per year.

Their hands-on approach includes providing on-going training every month to fresh produce gardeners and coconut oil producers, and conducting regular farm visits to help growers address any problems in their agricultural practice. The Ministry of Agriculture also supports organic farmers with advice on the best practices of managing land and soil without using chemicals.

WIBDI, which is organically certified by the National Association for Sustainable Agriculture in Australia, further acts as a link between small local producers and the global organics market, which has the potential to provide huge benefits: the global organic food market alone is estimated at more than 50 billion dollars.

“Our biggest success story would be our work with Body Shop International,” Stanley claimed. “Last year was the first year that we were able to meet demand. We sent just over 30 tonnes [to the Body Shop], which was amazing for our farmers with whom we have a fair trade relationship.”

International partners are selected carefully to ensure that they are supporting not only the product, but the mission to help local rural families.

“Sharing similar values is very important to us because that helps the process of getting the farmers to where they would like to be,” Stanley said.

In contrast, the domestic market is growing slowly. Working to generate greater local support and interest in the nutritional benefits of organic fruit and vegetables, WIBDI arranges weekly deliveries direct from farmers to local customers, including about 16 local hotels and restaurants.

But for Sione on Savaii Island, in addition to monetary gains, there is also a long-term inter-generational benefit of organic farming, which requires that farming land is free of chemicals and pesticides.

“I will have healthy soil for passing my farm on to the next generation, for the future livelihood of my family,” he emphasised.