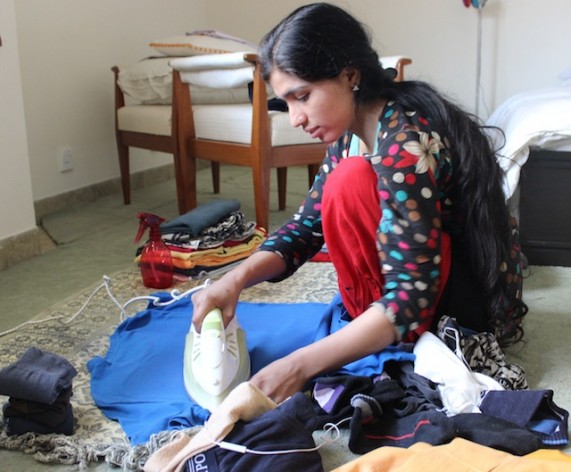 Aasia Riaz (24) is one of Pakistan’s 8.5 million domestic workers. She earns about 8,500 rupees (82 dollars) each month. Credit: Zofeen Ebrahim/IPS

KARACHI, Feb 9 2015 (IPS) - Sumaira Salamat, a mother of three in her mid-40s, works every day from ten in the morning until half-past two in the afternoon. She travels between three homes, and in each one she dusts, sweeps, washes utensils, and does the laundry. For her efforts, she earns about 3,000 rupees (29 dollars) per month.

Based in the eastern city of Lahore, capital of the Punjab province, Salamat is one of Pakistan’s estimated 8.5 million domestic workers, who daily perform the hundreds of housekeeping tasks necessary to keep a home spick and span.

"We want to be recognised as workers, just like our counterparts working in factories and hospitals are. We would also like to get old age benefits like pensions when we retire; but most of all we want better wages and proper terms of work." -- Sumaira Salamat, a domestic worker in Lahore
Experts here say that very nearly every middle class family in Pakistan employs some form of domestic help, but while the workers are a mainstay in houses and apartments across the country, the terms of their labour are far from clear; few have fixed working hours, benefits, pensions and proper contracts. Abuse is a frequent occurrence, and the laws governing domestic work are murky.

But things are changing. The recent formation of Pakistan’s first domestic workers trade union, combined with the promise of various bills pending in parliament, have workers here daring to hope that their situation might improve very soon.

Speaking to IPS over the phone from Lahore, Salamat says she has been on a four-year quest to secure some basic rights for herself and her fellow workers.

“It’s only in the last year-and-a-half that these women have finally realised the importance of what it means to become a united force,” she explains.

“We want to be recognised as workers, just like our counterparts working in factories and hospitals are. We would also like to get old age benefits like pensions when we retire; but most of all we want better wages and proper terms of work,” Salamat concluded.

Substandard working conditions are one of the primary grievances of employees in this sector. Many are lured into homes with the promise of a good life and a decent salary. What they find when they arrive is something altogether very different.

Take Sonam Iqbal, 22 and single, who has been a domestic worker since she was 15. “When we are interviewed, we are shown a rosy picture,” she claims, “but slowly and steadily the workload is increased and we cannot even protest.”

Long hours of work and low pay are not the only issues. Many female workers complain that they are always the ones held accountable for any loss of money or valuables in the home.

It is hard to state with any accuracy the number of domestic workers in the country. Labour Department Director Tahir Manzoor is not willing to give even a conservative estimate, explaining to IPS: “They [domestic workers] are largely invisible, isolated and scattered among thousands of homes and apartments.”

The Pakistan Bureau of Statistics states that of the 74 percent of the labour force engaged in the informal sector, a majority is employed in domestic work; this includes men and children.

Still, experts are agreed that the bulk of the industry is fueled by a steady stream of mostly uneducated rural women who flock to urban centres in search of work.

Their hopes of securing a better future, however, are often dashed when they realize their earnings fall far short of even the minimum wage, which is fixed at 10,000 rupees (about 97 dollars) per month in provinces like the Sindh, home to over 30 million people.

Last month, Pakistan’s minister for Inter Provincial Coordination introduced the Minimum Wages for Unskilled Workers (Amendment) Act 2015, which, if passed, will see wages of so-called unskilled workers increase from 97 to about 116 dollars per month in all the provinces.

But there is no guarantee that domestic workers will benefit from it, since there are no mechanisms with which to check implementation.

In fact, except for mention of domestic workers in two legislations, there is no specific law protecting their rights in Pakistan, says Zeenat Hisam, senior research associate at the Karachi-based NGO Pakistan Institute of Labour Education and Research (PILER).

The two pieces of legislation in question are the Provincial Employees Social Security Ordinance 1965, which states that “employers of a domestic servant” shall be liable to provide medical treatment “at his own cost”; and the Minimum Wages Act of 1961, which covers those employed as domestic labourers.

Despite these provisions, “the government has never notified the minimum wages applicable to domestic workers under this law in the last 53 years,” Hisam told IPS.

In December 2014, the Pakistan Workers Federation formed the very first Domestic Workers Trade Union. It has 235 members of which 225 are female domestic workers.

The Union was registered with the Registrar’s Trade Union in Lahore, under the provisions of the Punjab Industrial Relations Act, 2010, and was established under the International Labour Organisation (ILO)’s Gender Equality for Decent Employment project (GE4DE), funded by the Canadian government.

“The ILO is working with Pakistan to bring about changes in laws and policy in accordance with the ILO Domestic Workers Convention, 2011 (No. 189),” said Razi Mujtaba Haider, a programme officer with the ILO.

In keeping with such international standards, Manzoor says the labour department is “working in several areas – building the capacity of the domestic workers so that they have stronger bargaining power; working out a contract form between the employee and employer; fixing per-hour salary to stop exploitation; [providing] benefits and social security and most importantly, restricting employment of children, specially girls aged 14 and under.”

While Pakistan defines a child as a “person below 14 years of age” it does not declare domestic work as hazardous.

Manzoor says the Punjab assembly is on the verge of enacting the Prohibition of the Employment of Children Act 2014, which he hopes will restrict the use of child labourers in domestic settings.

Quoting various media reports, Hamza Hasan, a manager of the research and communications section of the Society for the Protection of the Rights of the Child (SPARC), says that between 2010 and 2013, a total of “51 cases of torture of child domestic workers were reported from different parts of Pakistan resulting in the deaths of 24 children”.

He added that in 2013 alone eight children working in homes died, likely from overwork or abuse.

Both industry experts and employees are waiting anxiously for the sweeping changes that will relegate such horror stories to a thing of the past. But until the necessary laws are passed and ratified, Pakistan’s domestic workers will continue to toil for long hours, and low pay.