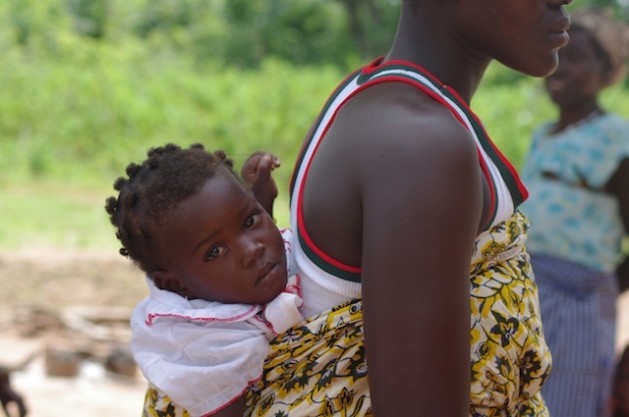 KORHOGO, Cote d’Ivoire, Aug 14 2012 (IPS) - Salimata Coulibaly, director of a medical centre in the town of Korhogo in the northern Cote d’Ivoire region of Savanes, stood before a chart displaying before-and-after photos of local children – one taken when each child arrived at the centre, and one after he or she responded to treatment for malnutrition.

In recent weeks she has had no shortage of photos to take. The number of children brought to the centre for weighing is on the rise, having ballooned from 162 in April to 674 in July.

“A crisis has begun. We’re in the lean season,” Coulibaly told IPS, referring to the period from June to August when food stocks in the part of this West African nation typically run low ahead of the next harvest.

Christina de Bruin, deputy representative for the United Nations Children’s Fund (UNICEF) in Cote d’Ivoire, told IPS that her agency had noted a similar increase of malnourished children in feeding centres throughout the north.

Seasonal hunger is nothing new in northern Cote d’Ivoire, a region where families cope with high levels of poverty and poor soil. But this year new challenges have arisen that could compound the problem.

The region was hit hard by Cote d’Ivoire’s post-election crisis, a six-month civil conflict that claimed at least 3,000 lives, which erupted when former President Laurent Gbagbo refused to cede office after losing the November 2010 election.

Hundreds of thousands of Ivoirians were displaced, with tens of thousands ending up in the northern Savanes region, where they were largely taken in by host families, according to the U.N. Although the crisis ended more than a year ago, allowing some displaced to return, the strain put on host families’ food stocks is still being felt.

The political unrest has since been replaced by the regional food crisis in the Sahel region of Senegal, Mauritania, Mali, Burkina Faso, Niger and Chad brought on by erratic rains and the resulting poor harvests and water shortages. Oxfam International says 18 million people are facing a food crisis this year in West and Central Africa, including in Burkina Faso and Mali, which border Cote d’Ivoire.

De Bruin said that the regional food shortage had, in effect, “drained a part of the local harvest” in Cote d’Ivoire by sharply increasing the cost of staple foods.

Lastly, erratic rains in Cote d’Ivoire last year made the harvest especially poor, meaning that the lean season has been tougher than usual for many families.

All of this has the potential to undo recent nutritional gains in the region. According to data cited by the U.N., global acute malnutrition had fallen from 17.5 percent in 2008 to 5.8 percent earlier this year.

However, a survey conducted in April by the U.N. World Food Programme, the Food and Agriculture Organisation and the Ministry of Agriculture estimated that some 110,000 people in the Savanes region could be at risk of food insecurity, and that “the most likely scenario in 2012 could be compared to the situation in 2008,” when the region was under rebel control and reeling from a decline in basic social services.

At the Korhogo medical centre, Coulibaly said she watched conditions gradually grow more dire. Not only are many families eating just one meal per day, she said, they are often so hard-pressed to work for that meal that they delay seeking medical care when the first signs of malnutrition appear.

“They only come to nutrition centres when it’s really becoming serious,” she said. “They tend to wait until it’s too late because they don’t want to waste time getting treatment.”

At a nutrition centre in a village outside of Korhogo called M’Benguebougou, Fatoumata Yire Soro, 22, described the pressure she faced before deciding to bring her two-year-old daughter in for treatment about two months ago.

“I was very concerned about the health of my child, who I could see was malnourished,” said Soro, who sells charcoal. “But at the same time, I have to deal with the pressure from home because I am not in the field (earning a living). In the end, the health of my child was the most important thing.”

Delaying medical treatment for children is just one adverse coping mechanism adopted by families struggling to feed themselves. Parents are also more likely to take their children out of school – something De Bruin said had been seen throughout the region in response to the Sahel food crisis.

“A lot of children have left the education system, unfortunately,” she said. “We are seeing that due to the Sahel crisis children are leaving school earlier.”

Thomas Bassett, professor of geography at the University of Illinois at Urbana-Champaign and co-author of the 2010 book The Atlas of World Hunger, told IPS that it is important to be mindful of the structural factors contributing to hunger in Cote d’Ivoire.

More than 40 percent of children under the age of five here experience stunting, meaning they are not getting sufficient food for normal growth.

“We know that about 45 percent of the population lives on two dollars per day. So that’s almost half the population (of nearly 20 million people) which is vulnerable to falling into hunger,” said Bassett.

“If you’re living on two dollars per day, any kind of extreme event – it could be a drought, it could be political instability, it could be low prices for your cash crops – would put people over the edge.” Bassett has been conducting fieldwork in Korhogo and its surroundings for more than 30 years.

One of the main reasons for this poverty, he said, is that farmers are not receiving enough money for cash crops, namely cotton and cashews.

The prices for both are set by private umbrella organisations composed of producers and purchasers based in Abidjan. He said this problem could in part be addressed by greater mobilisation by farmers to demand the highest possible prices for their product. A secondary intervention, Bassett said, would be to increase access to agricultural inputs such as fertiliser.

Bassett added, however, that the government of Alassane Ouattara was not likely to take on the problem of hunger in the north with great energy, especially if the administration felt secure in retaining strong voter support from the region.

Following a coup attempt targeting former president Gbagbo in 2002, the north was partitioned off from the south and was administered by the rebel Forces Nouvelles (New Forces) until the 2010 election. Northerners voted overwhelmingly for Ouattara, who hails from the region.

De Bruin said that the government was working with NGOs to provide some assistance, notably in helping to educate communities about the dangers of malnourishment for children, which are not fully appreciated.

But she said that people in the region were expecting significant gains under Ouattara, especially following the decade-long crisis, during which basic social services such as education and health care were dismantled.

“Definitely people are expecting improvement from Ouattara,” she said. “Ensuring children grow up healthy and that they have education – I think only that can break the cycle of poverty and the cycle of violence.”