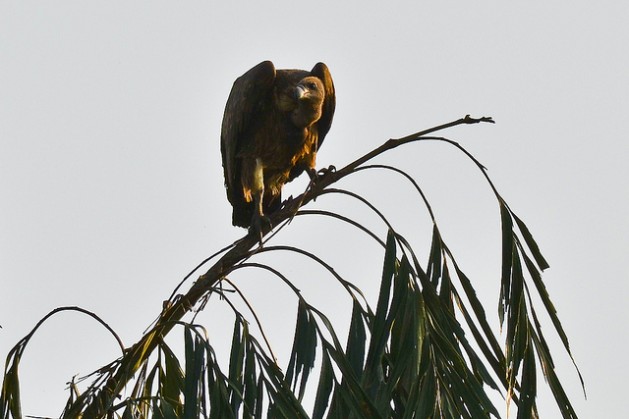 Over the past two decades, 99 percent of India’s vultures have disappeared. Credit: gkrishna63/CC-BY-ND-2.0

PYEONGCHANG, Republic of Korea, Oct 16 2014 (IPS) - The Mountain Chicken isn’t a fowl, as its name suggests, but a frog. Kimisha Thomas, hailing from the Caribbean island nation of Dominica, remembers a time when she could find these amphibians or ‘crapaud’ as locals call them “just in the backyard”.

Known also as the Giant Ditch Frog, these creatures form a crucial part of Dominica’s national identity, with locals consuming them on special occasions like Independence Day. Today, hunting mountain chicken is banned, as the frogs are fighting for their survival. In fact, scientists estimate that their numbers have dwindled down to just 8,000 individuals.

Locals first started noticing that the frogs were behaving abnormally about a decade ago, showing signs of lethargy as well as abrasions on their skin. “Then they began to die,” explained Thomas, an officer with Dominica’s environment ministry.

“People also started to get scared, fearing that eating crapauds would make them ill,” she adds. In fact, this fear was not far from the truth; preliminary research has found that Chytridiomycosis, an infectious disease that affects amphibians, was the culprit for the wave of deaths.

Some 2,599 of 71,576 species recently studied are thought to be endangered -- International Union for the Conservation of Nature (IUCN)
Besides the mountain chicken, there has been a sharp decline in the population of the sisserou parrot, which is found only in Dominica, primarily in the country’s mountainous rainforests. Thomas says large-scale destruction of the bird’s habitat is responsible for its gradual disappearance from the island.

Dominica is not alone in grappling with such a rapid loss of species. According to the Red List of Threatened Species, one of the most comprehensive inventories on the conservation status of various creatures, some 2,599 of 71,576 species recently studied are thought to be endangered.

Compiled by the International Union for the Conservation of Nature (IUCN), the Red List aims to increase the number of species assessed to 160,000 by 2020. But even with only half the world’s biological species included in the index, the forecast is bleak.

While the extinction or threat of extinction of thousands of species poses huge challenges across the board, tribal and indigenous communities are generally first to feel the impacts, and will likely bear the economic and cultural brunt of such losses.

As Thomas points out, “The crapaud was our national dish. The sisserou parrot [also known as the Imperial Amazon] sits right in the middle of our national flag. Their loss means the loss of our very cultural identity.”

A similar refrain can be heard among the Parsi community of India, whose culture dictates that the dead be placed in high structures, called ‘towers of silence’, that they may be consumed by birds of prey: kites, vultures and crows. The unique funeral rites are an integral part of the Zoroastrian faith, which stipulates that bodies be returned to nature.

But over the past two decades, 99 percent of India’s vultures have disappeared, making it impossibly difficult for the Parsi community to keep up with a centuries-old tradition.

Besides severely affecting ancient cultural and spiritual practices, the disappearance of various species is also taking an economic toll on indigenous communities according to 65-year-old Anil Kumar Singh, who was born and raised in the village of Chirakuti in India’s northeastern hill districts.

Singh says that as a child, he never saw a doctor for minor ailments like the common cold or an upset stomach.

“We used Vishalyakarni [a herb] for pains and cuts. We drank the juice of basak leaves (adhatoda vasica) for a cough and used the extract from lotus flowers for dysentery,” he tells IPS.

“But today, these plants don’t grow here anymore. Even when we try, they die out soon and we don’t know the reason. We now have to buy medicines from a chemist’s shop for everything,” he asserts.

Sometimes, the cost is much higher. Northern Indian states like Haryana and Uttar Pradesh have experienced an explosion in the population of stray dogs, giving rise to health risks among locals.

By way of explanation, Neha Sinha, advocacy and policy officer of the Bombay Natural History Society in India (BNHS), a Mumbai-based conservation charity, tells IPS that the phenomenon of increasingly feral dogs can be traced to Indian farmers’ practice of leaving dead cattle out in the open to be consumed by birds of prey.

With no vultures to pick the beasts clean, dogs are now getting to the carcasses, growing more and more vicious and resorting to attacks on humans. BNHS is currently breeding vultures in captivity in order to prevent their complete extinction, but it is unlikely the birds will regain their numbers from 20 years ago.

Meanwhile, according to a study by Birdlife International, the population of feral dogs in India has grown by 5.5 million due to the disappearance of vultures.

The report says there have been “roughly 38.5 million additional dog bites and more than 47,300 extra deaths from rabies, [which] may have cost the Indian economy an additional 34 billion dollars.”

The near extinction of vultures in India is attributed to diclofenac, a painkiller that is often given to cows and buffalos to which vultures are allergic. Intense campaigning against use of the drug led to a government ban in 2004, but implementation of the law has been poor, and diclofenac is still widely used, according to Singh of BNHS.

“The farmers know [the drug] is banned but they continue to use it because the law is not being enforced,” she said.

In several other cases, communities are left confused as to the reasons behind species loss, making it increasingly hard to settle on a solution. For instance, even after a decade of seeing their unique creatures vanish, Dominica still does not know what brought the Chytridiomycosis fungus to their soil, or how to deal with it.

This knowledge gap is a double whammy for indigenous communities, whose lives and livelihoods depend heavily on the species they have lived side by side with for millennia.

Lucy Mulenekei, executive director of the Indigenous Information Network (IIN), tells IPS on the sidelines of the 12th meeting of the Conference of the Parties to the Convention on Biological Diversity (COP 12), currently underway in Pyeongchang, South Korea, that the decline in the livestock population in Kenya has affected the Maasai people, a pastoral tribe that has always relied on their herds for sustenance.

Now forced to live off the land, the tribe is faltering.

“The Maasai people don’t know what kind of farming tools they need, or how to use them. They don’t know what seeds to use and how to access them. There is a huge gap in knowledge and technology,” explains Mulenekei, who is Maasai herself.

In response to the growing crisis, governments and U.N. agencies are pushing out initiatives to tackle the problem at its root.

Carlos Potiara Castro, a technical advisor with the Brazilian environment ministry, is leading one such project in the Bailique Archipelago, 160 km from the Macapa municipality in northern Brazil, where local fisher communities are taught to conserve biodiversity. Already, community members have learned the properties of 154 medicinal plants.

The annual cost of the project is about 50,000 dollars, but Potiara says a lot more funding will be needed in order to scale up the work and replicate such efforts around the country.

This might soon be possible under a new initiative launched by the government of Germany together with the United Nations Development Programme (UNDP) and the Global Environment Facility (GEF), which offers 12.3 million euros over a period of five years to indigenous communities in over 130 countries to help them conserve protected areas.

Yoko Watanabe, a senior biodiversity specialist at the natural resources team of the GEF Secretariat, tells IPS the grants will also cover the cost of trainings, to pass on necessary skills to indigenous communities who are recognised as “indispensable to biodiversity conservation.”