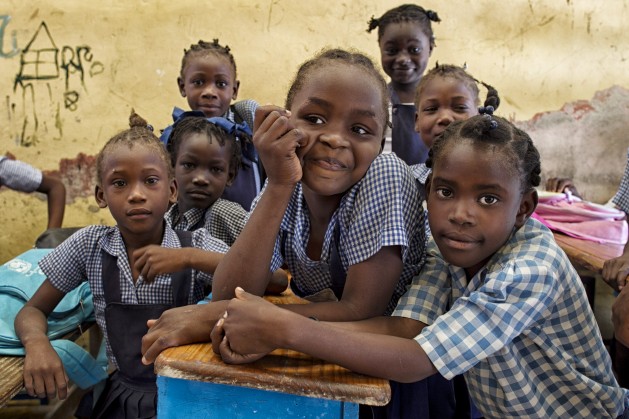 These Haitian schoolchildren are being supported by a WFP school feeding programme designed to end malnutrition which, for many countries, can be a double burden where overweight and obesity exist side by side with under-nutrition. Credit: UN Photo/Albert González Farran

ROME, Nov 23 2014 (IPS) - Not only do 805 million people go to bed hungry every day, with one-third of global food production (1.3 billion tons each year) being wasted, there is another scenario that reflects the nutrition paradox even more starkly: two billion people are affected by micronutrients deficiencies while 500 million individuals suffer from obesity.

The first-ever Global Nutrition Report, a peer-reviewed publication released this month, and figures from the Rome-based U.N. Food and Agriculture Organisation (FAO) highlight a multifaceted and complex phenomenon behind malnutrition.

“The double burden of malnutrition [is] a situation where overweight and obesity exist side by side with under-nutrition in the same country”, according to Anna Lartey, FAO’s Nutrition Director. “And we are seeing it in lots of the countries that are developing economically. These are the countries that are going through the nutrition transition”.

Beside hunger then, governments and development organisations have also been forced to start tackling over-nutrition.

“While under-nutrition still kills almost 1.5 million women and children every year, growing rates of overweight and obesity worldwide are driving rising diseases like cancer, heart disease, stroke and diabetes”, Francesco Branca, Director of Nutrition for Health and Development at the World Health Organisation (WHO), explained in a statement.

The solution does not lie in the realm of science, health or agriculture alone. It requires a cross sectorial and multi dimensional approach that includes education, women’s empowerment, market regulation, technological research and, above all, political commitment.

For this reason, representatives of governments, multilateral institutions, civil society and the private sector met in Rome for the Second International Conference on Nutrition (ICN2) that took place at FAO headquarters on Nov. 19-21. Jointly organised by FAO and WHO, the conference came 22 years after its first edition and, unfortunately, addressed the same unsolved problem.

Malnutrition, in all its forms, has repercussions on the capability of people to live a full life, work, care for their children, be productive, generate a positive cycle and improve their living conditions. Figures from the Global Nutrition Report estimate that the cost of malnutrition is around four to five percent of national GDP, suggesting that prevention would be more cost-effective.

With the goal of improving nutrition through the implementation of evidence-based policies and effective international cooperation, ICN2 produced two documents to help governments and stakeholders head in the right direction: the Rome Declaration on Nutrition and a Framework for Action.

The conference also heard a strong call for accountability and for the strengthening of nutrition in the post-2015 development agenda.

Flavio Valente, who represented civil society organisations at ICN2, remarked that “the current hegemonic food system and agro-industrial production model are not only unable to respond to the existing malnutrition problems but have contributed to the creation of different forms of malnutrition and the decrease of the diversity and quality of our diets.”

This position was shared by many speakers, who stressed the negative impact that advertising of unhealthy food has, mainly on children.

According to a participant from Chile, calling obesity a non-communicable disease is misleading, because it spreads through the media system very effectively. He added that Chile currently risks being brought before the World Trade Organisation (WTO) by multinational food companies for its commitment to protect public health by regulating the advertising of certain food.

This happens in a country where 60 percent of people suffer from over-nutrition and one obese person dies every hour, according to the permanent representative of Chile at FAO, Luis Fernando Ayala Gonzalez.

In an address to the conference, Queen Letizia of Spain also acknowledged the responsibility of the private sector: “It is necessary to help the economic interests converging towards public health. It is worth remembering that no country in the world has been able to reverse the epidemic of obesity in all age groups. None.”

The outcome of ICN2 brought consensus around a plan of action and some key targets.

Educating children about healthy habits and women who are in charge of feeding the family was recognised as crucial, as was breastfeeding, which should be encouraged (through paid maternity leave and breastfeeding facilities in the workplace), and the need to empower women working in agriculture.

Supporting small and family farming would also give people better opportunities to eat local, fresh and seasonal produce as well as fruit and vegetables, reducing the consumption of packaged, processed food that is often low in nutrients, vitamins and fibres and high in calories, sugar, salt and fats.

However, teaching people how to eat is not enough, if they cannot easily access quality food – hence the need for relevant policies targeting the food chain and distribution.

Initiatives like the Fruit in Schools programme proposed by New Zealand go in the right direction, especially when implemented within a coordinated policy that promotes physical activity and a healthy lifestyle that fights consumption of alcohol and tobacco.