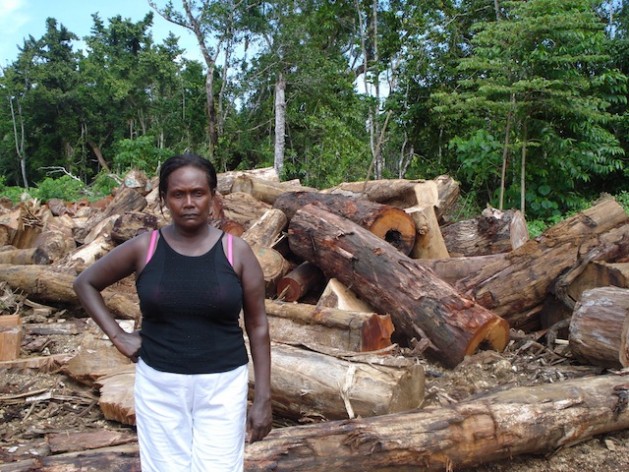 SYDNEY, Dec 1 2014 (IPS) - Rampant unsustainable logging in the southwest Pacific Island states of Papua New Guinea and Solomon Islands, where the majority of land is covered in tropical rainforest, is worsening hardship, human insecurity and conflict in rural communities.

Paul Pavol, a customary landowner in Pomio District, East New Britain, an island province off the northeast coast of the Papua New Guinean mainland, told IPS that logging in the area had led to “permanent environmental damage of the soil and forests, which our communities depend on for their water, building materials, natural medicines and food.”

Four years ago, a Malaysian logging multinational obtained two Special Agricultural Business Leases (SABLs) in the district, but local landowners claim their consent was never given and, following legal action, the National Court issued an order in November for the developer to cease logging operations.

“Within ten years nearly all accessible forests will be logged out and at the root of this problem is endemic and systematic corruption." -- Spokesperson, Act Now PNG
According to Global Witness, the company had cleared 7,000 hectares of forest and exported more than 50 million dollars worth of logs.

“We never gave our free, prior and informed consent to the Special Agricultural Business Leases (SABLs) that now cover our customary land … and we certainly did not give agreement to our land being given away for 99 years to a logging company,” Pavol stated.

One-third of log exports from PNG originated from land subject to SABLs in 2012, according to the PNG Institute of National Affairs, despite the stated purpose of these leases being to facilitate agricultural projects of benefit to local communities.

Pavol also cited human rights abuses with “the use of police riot squads to protect the logging company and intimidate and terrorize our communities.”

Last year an independent fact-finding mission to Pomio led by the non-governmental organisation, Eco-Forestry Forum, in association with police and government stakeholders, verified that police personnel, who had been hired by logging companies to suppress local opposition to their activities, had conducted violent raids and serious assaults on villagers.

Papua New Guinea, situated on the island of New Guinea, home to the world’s third largest tropical rainforest, has a forest cover of an estimated 29 million hectares, but is also the second largest exporter of tropical timber.

The United Nations Food and Agriculture Organisation (FAO) predicts that 83 percent of the country’s commercially viable forests will be lost or degraded by 2021 due to commercial logging, mining and land clearance for oil palm plantations.

“Within ten years nearly all accessible forests will be logged out and at the root of this problem is endemic and systematic corruption,” a spokesperson for the non-governmental organisation, Act Now PNG, said.

“We do not have tough penalties for law breakers and our laws are not enforced,” Pavol added, a view supported by London’s Chatham House.

Environmental devastation and logging-related violence is increasing adversity in Pomio, one of the least developed districts in East New Britain, where there is a lack of health services, decent roads, water and sanitation. Life expectancy is 45-50 years and the infant mortality rate of 61 per 1,000 live births is significantly higher than the national rate of 47.

In the neighbouring Solomon Islands, where 2.2 million hectares of forest cover more than 80 percent of the country, the timber-harvesting rate has been nearly four times the sustainable rate of 250,000 cubic metres per year.

While timber has accounted for 60 percent of the country’s export earnings, this is unlikely to continue, given the forecast by the Solomon Islands Forest Management Project that accessible forests will be exhausted by next year.

High demand for raw materials by growing Asian economies is a major driver of legal and illegal logging in both countries, with the industry dominated by Malaysian companies, and China the main export destination.

Unscrupulous practices, including procuring logging permits with bribes and breaching agreed logging concession areas, are extensive. More than 80 percent of the wood-based trade from PNG and Solomon Islands derives from unlawful extraction with illegal log exports from both island states worth 800 million dollars in 2010, reports the United Nations Office on Drugs and Crime (UNODC).

Since 2003, international companies, most involved with logging, have gained access to 5.5 million hectares of forest in PNG, in addition to the 8.5 million hectares already subject to timber extraction, through fraudulent acquisition of SABLs, according to a Commission of Inquiry and study by the California-based Oakland Institute.

“In Solomon Islands the links between politicians and foreign logging companies are complex and well-entrenched. We regularly hear stories of politicians using their power to protect loggers, influence police and give tax exemptions to foreign businesses. In return, loggers fund politicians,” a spokesperson for Transparency Solomon Islands said.

Many national forestry offices in developing countries lack the technical and human resources to adequately monitor logging operations and are ill-equipped to deal with organised crime networks that facilitate the extraction and movement of illicit timber. Associated money laundering is also an issue with the Australian Federal Police estimating that 170 million dollars of funds deriving from crime in PNG are laundered through banks and property investment in Australia every year.

But while an Illegal Logging Prohibition Act recently came into force in Australia, making it a criminal offence to import or process illegal timber, no such legislation exists in the main market of China.

Transparency Solomon Islands says that government accountability needs to be strengthened and rural communities educated about their rights, the law and affective action that can be taken at the local level.

Inequality and low human development among the rural poor is further entrenched by the failure of both countries to channel resource revenues into provision of infrastructure, basic services and equitable economic opportunities.

In the Solomon Islands, logging has been the government’s main source of revenue for nearly 20 years, with GDP growth reaching 10 percent in 2011.

But the Pacific Islands Forum reports that “strong resource-led growth is failing to trickle down to the disadvantaged”, with the country ranked 157th out of 187 countries for human development.