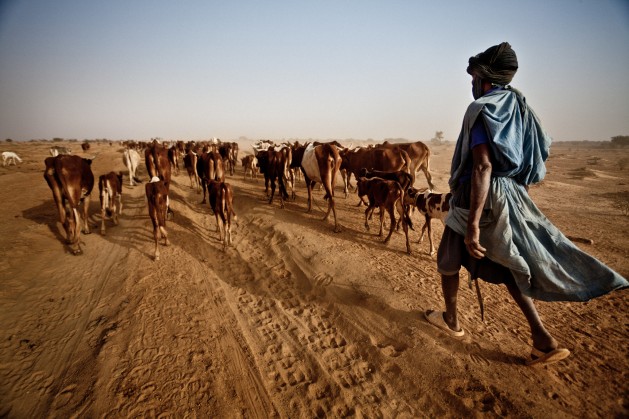 Dja Abdullah, just one victim of the gathering pace of climate change fuelled by coal-fired power stations, has walked 300 km with his cattle in search of fresh pasture in the Sahel region of Mauritania. Credit: Pablo Tosco/Oxfam

LONDON, Jun 6 2015 (IPS) - As heads of state and government of the G7 states prepare for their Jun. 7-8 summit in Germany, Oxfam has released a new report titled Let Them Eat Coal which they may find hard to digest.

According to the report, coal plants in the G7 countries – Canada, France, Germany, Italy, Japan, United Kingdom and United States – are on track to cost the world 450 billion dollars a year by the end of the century and reduce crops by millions of tonnes as they fuel the gathering pace of climate change.

“Coal-fired power stations … increasingly look like weapons of destruction aimed at those who suffer the impacts of changing rainfall patterns as well as of extreme weather events” – Professor Olivier de Schutter, former U.N. Special Rapporteur on the Right to Food

Launching the report, which has been endorsed by business leaders, academics and climate experts, Oxfam warns that coal is the biggest driver of climate change, which is already hitting the world’s poorest people hardest and making the fight to end hunger tougher.

Noting that the G7 countries remain major consumers of coal, Oxfam is calling on the G7 leaders meeting in Germany to shift from coal to renewable energy sources which offer a safer and cost effective alternative and the prospect of millions of new jobs around the world.

This, it says, would also be a giant step towards those countries not only meeting current emissions targets but moving closer to what is urgently needed.

The international agency reports that Africa, for example, faces costs of 84 billion a year by the end of the century due to the damage caused by G7 coal emissions. This is 60 times the amount Africa currently receives from the G7 in aid to support agriculture and food production.

The Intergovernmental Panel on Climate Change (IPCC) has warned that Africa’s food production systems are highly vulnerable to climate change, with declines likely in cereal crops across the continent of up to 35 percent by mid-century. Oxfam warns that seven million tonnes of staple crops could be lost annually by the 2080s because of G7 coal emissions.

Celine Charveriat, Oxfam International’s Director of Advocacy and Campaigns, said: “The G7 leaders must stop using emissions growth in developing countries as an excuse for inaction and begin leading the world away from fossil fuels by starting with their own addiction to coal.

“The G7’s coal habit is racking up costs for Africa and other developing regions. It’s time G7 leaders woke up to the hunger their own energy systems are causing to the world’s poorest people on the frontline of climate change.

Referring to the U.N. Climate Change Conference scheduled for December in Paris, Charveriat said: “Ahead of a new climate deal due to be struck at the end of this year, G7 leaders can give the global fight against climate change the momentum it needs by shifting away from coal. This will make significant additional cuts in their emissions, create jobs and be a major step towards a safer, sustainable and prosperous future for us all.”

Globally, coal is responsible for almost three-quarters (72 percent) of power sector emissions, and while more than half of today’s coal consumption is in developing countries, the scale of G7 coal burning is considerable – if G7 coal plants were a country, noted Oxfam, it would be the fifth biggest emitter in the world.

G7 coal plants emit double the fossil fuel emissions of Africa and ten times as much as the 48 least developed countries.

At the 2009 Climate Change Conference held in Copenhagen, all countries agreed to prevent warming of more than 2°C to avoid runaway climate change. Since then, said Oxfam, five of the G7 countries – France, Germany, Italy, Japan and United Kingdom – have been burning more coal, and the world is now heading for an increase in global warming by 4°C.

According to de Schutter, “climate disruptions are already affecting many poor communities in the global South, and coal-fired power stations are contributing, every day, to make this worse. They increasingly look like weapons of destruction aimed at those who suffer the impacts of changing rainfall patterns as well as of extreme weather events.”

Oxfam says that the G7 countries must lead the way because they are most responsible for climate change, and because they have the most resources to decarbonise their economies and fund both emissions cuts and adaptation so that developing countries can protect themselves from climate change and develop in a low-carbon way.

Oxfam is also calling on the G7 to stand by existing commitments to jointly mobilise 100 billion dollars a year by 2020, and to make visible progress in both raising public finance over the next five years and increasing the proportion of funding for adaptation to climate change.