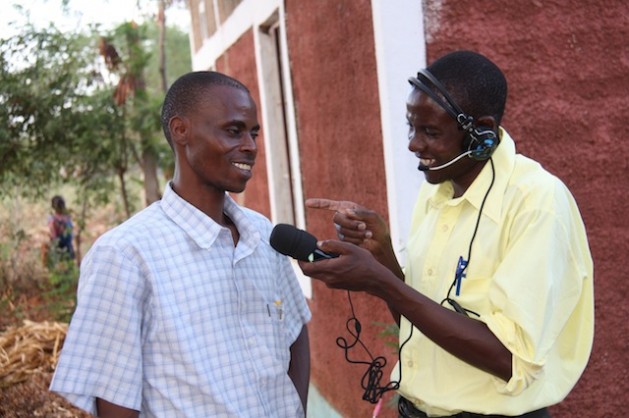 MAKUENI, Kenya, Jun 28 2012 (IPS) - On a Wednesday morning in Mutitu-Andei township in Makueni County, one of Kenya’s driest areas, smallholder farmer Josephine Mutiso tunes into Radio Mang’elete 89.1 FM and listens as meteorological experts discuss the changes in rainfall patterns in the county.

In the past Mutiso has implemented much of the advice from the community station and has been able to successfully use “Zai” pit farming to rehabilitate her dry farmland.

This is a traditional technique which involves digging pits about 30 centimetres deep and filling them with manure and topsoil. When it rains, the mixture of topsoil and manure is able to retain moisture for a longer period, and it ensures that the crop nutrients are concentrated in the pits.

“I’m in the process of trying it on my one hectare plot for the first time, and it is clear that the spinach crops I planted in the pits are healthier than those planted in furrows,” said Mutiso, a 32-year-old mother of one.

While Makueni County in Kenya’s Eastern Province has always been an arid area, over the last 15 years there has been a significant change in rainfall patterns, which have become more erratic. As a result Mutiso and other farmers here have had to resort to alternative farming methods.

Michael Arunga, the World Vision Emergency Communications Advisor – Africa, says that out of 10 rainy seasons in Makueni County and the greater eastern Kenya, only one season yields enough rainfall to sustain agricultural growth.

“This is an emerging pattern that never existed three decades ago when rains would fail only once every two years,” he said.

“From the beginning of 2009 towards the end of 2011 there was no rainfall to warrant the planting of anything,” Mzee Francis Kioko, a smallholder farmer from Mutitu-Andei township, told IPS through a translator.

Makueni County suffers with persistent drought and famine, and 56 percent of the population lives below the poverty line here.

In June 2011 the drought in the region was declared a national disaster and many harvests failed. As a result, the dependence on food aid has increased. According to the United Nations World Food Programme, over two million people in Kenya alone were given emergency food aid towards the end of 2011.

The constant food insecurity in Makueni County and in Eastern Province is one of the reasons why Radio Mang’elete was set up in 2009.

The Mang’elete Community Integrated Development Programme (MCIDP), a network that brings together 33 women’s self-help groups from the Nthongoni constituency in Makueni County, owns the station.

“The world is changing very fast. New challenges are emerging … We have new diseases, new technologies, new climatic conditions, and as a result the world is completely new. Yet to survive in the new world, we thought that we needed a tool that would guide us as we cope with it,” said Sabina Mwete, chairperson of the MCIDP.

The station’s producers schedule much of their programming around climate change adaptation.

The station has been able to address topics like how to plant drought-tolerant crops and keep drought-resistant animals such as goats. They have also discussed the integration of emerging agricultural technologies with traditional methods of farming, the use of appropriate farm inputs, and new methods of pest and disease control.

“We usually invite people who are either experts or have the relevant experience on such issues into the studio to share their knowledge with our audience,” said Dominic Mutua, the head of programmes at Radio Mang’elete.

“For example, to inform the community about the timing for planting, we have been forced to integrate the scientific meteorological forecasts with indigenous weather prediction knowledge.”

And it is something that is greatly needed in rural Kenya. According to a 2010 study by the Heinrich Böll Foundation titled “Climate Change Vulnerability and Adaptation Preparedness in Kenya”, climate change awareness in Kenya is still very low. The research quoted the results of an opinion poll carried out between 2007 and 2008 by Gallup, which found that only 56 percent of Kenyans reported knowledge about global warming. A majority of those unaware of the situation, the study said, were the rural poor.

While smallholder farmers in the region are benefitting from the knowledge broadcast on Radio Mang’elete, the MCIDP has also profited. Each of its 33-member groups are involved in various agricultural and climate-related projects that include initiatives in horticulture, and projects that focus on irrigation and domestic water use.

“We have seen positive change, especially in how people are adapting to climate change. And they attribute it to the information learnt from Radio Mang’elete. This gives us much pride,” said Mwete.

Susan Wambua is one of the rural smallholder farmers who are now very aware of the changing rainfall patterns in this country.

The 66-year-old mother of six has a one-hectare piece of land in Makongeni village in Nthongoni constituency.

“It didn’t rain in this area for eight months,” said Wambua of her experience last year. But then this February, on the second day of the month, the rains finally came.

And Wambua had been expecting it. Radio Mang’elete’s meteorological experts had made the prediction and following their advice Wambua had planted her maize seed in the dry soil the very day before it rained.

Though the predictions are not always accurate, Wambua is ready to take the risk.

Wambua admitted that she has had losses as well. It happened last June when the rains fell one and a half weeks after they were predicted and she had already cast her seed in the soil.

“We have seen people wait until it rains before they plant. But they sometimes end up losing out because in many cases the rainfall is not sufficient or, as we have witnessed in the recent past, it may rain just once.”

But, Wambua said, in February she planted ahead of the rainfall and had a crop to harvest, while many who waited for the rain to fall first before planting lost out.

“It is better to risk with the seed than to risk with the harvest. That is why I’m preparing for planting at any time now, because from what we heard from the radio, and from our own indigenous knowledge, I believe that it will rain in not less than six days from today,” she said.

It is hard to believe. The soil on her land appears arid and even the weeds here have dried up because of the blazing sun. And when IPS visits her, there still appears to be no rain in sight. The skies are clear.

But, five days after her interview with IPS, it rained.