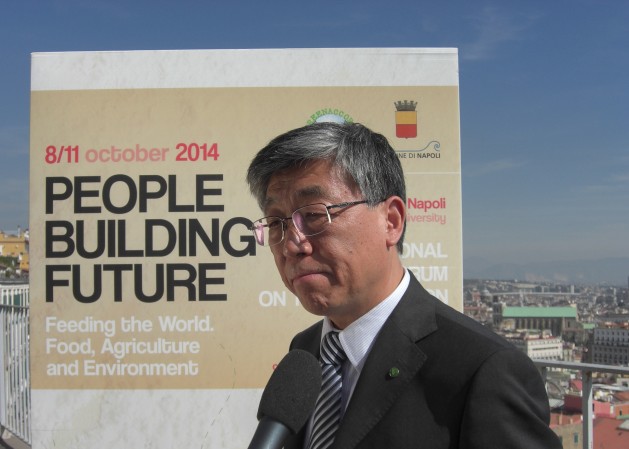 “We need a transformative change in our food and agricultural policies to have sustainability” – Ren Wang, FAO’s Agriculture and Consumer Protection Department. Credit: A.D. McKenzie/IPS

NAPLES, Italy, Oct 9 2014 (IPS) - In his parody of the Michael Jackson hit “Beat It”, the American satirist and singer Weird Al Yankovic has a parent urging his son to eat the food on his plate, warning that “other kids are starving in Japan”.

The parody has raised smiles since it was released 30 years ago, but today “Eat It” could be a battle cry for activists trying to reduce the widespread waste of enormous quantities of food, an urgent concern around the world and no laughing matter.

“Even if just one-fourth of the food currently lost or wasted globally could be saved, it would be enough to feed 870 million hungry people in the world” – SAVE FOOD Initiative

“We need a transformative change in our food and agricultural policies to have sustainability,” Wang said.

Organised by the Rome-based environmental group Greenaccord and hosted for the second time by the city of Naples from Oct. 8 to 11, this year’s forum – entitled ‘Feeding the World: Food, Agriculture and Environment’ – has brought together experts, journalists and policy makers.

It comes as the United Nations’ International Year of Family Farming draws to a close, and as rising food prices continue to pound the incomes of vulnerable groups.

Wang said that although global food production has tripled since 1946 and the world has reduced the prevalence of undernourishment over the past 20 years from 18.7 to 11.3 percent, food security is still a crucial issue.

The food that goes to waste is about one-third of current global food production, so expanding current agricultural output is not necessarily the answer. In fact, the world produces enough food for every individual to have about 2,800 calories each day, according to scientists. But while some people are able to waste food, others do not have enough.

Even if waste and hunger might not be directly related, there is unquestionable inequality in the world’s food system, said Gary Gardner, a senior fellow with the Worldwatch Institute, a research and outreach institute that focuses on sustainable policies.

“In wealthy countries, food waste often occurs at the level of the retailer or consumer, either at the grocery store or at home where a lot of food is thrown away,” he told IPS.

By contrast, food waste in developing countries mainly happens at the “farm or processing” levels, Gardner said. “Food is lost because usually there aren’t systems for getting it to processing facilities and then to the consumer efficiently.”

Food losses and waste amount to roughly 680 billion dollars in industrialised countries and 310 billion dollars in developing countries, according to the SAVE FOOD Initiative, a project involving the German trade fair group Messe Düsseldorf in collaboration with FAO and the U.N. Environment Programme (UNEP).

Saying that “consumers in rich countries waste almost as much food (222 million tonnes) as the entire net food production of sub-Saharan Africa (230 million tonnes)”, the SAVE FOOD initiative found that “even if just one-fourth of the food currently lost or wasted globally could be saved, it would be enough to feed 870 million hungry people in the world.”

In Europe, the vast quantity of food thrown out by supermarkets has sometimes sparked public outrage, especially in countries where it is illegal for people to help themselves to the rejected items.

British supermarket chain Tesco has acknowledged discarding some 28,500 tonnes of food in the first six months of 2013, according to reports, and in Britain overall, an estimated 15 million tonnes of food is wasted annually.

In the United States, agencies estimate that roughly 40 percent of the food produced is discarded in landfills, with supermarkets accounting for much of this.

Yet, on both sides of the Atlantic, people can be prosecuted for taking food from dumpsters – a sore point with some activists who have organised public campaigns that offer meals cooked from thrown-away food.

At the Naples forum, where experts discussed the social and environmental consequences of food waste, among other issues, Gardner of the Worldwatch Institute described the experiences of activist Rob Greenfield, who has fed himself entirely from food from dumpsters while cycling across the United States.

“Many times the food was in packages that hadn’t been opened – whole boxes of cereal, sodas, that kind of thing – that for various reasons had been thrown out but which was perfectly good food to him,” Gardner told IPS in an interview.

“That’s not the optimal way for us to get rid of waste,” he added. “The better way would be not to generate that waste in the first place.”

Tesco and several other British supermarket chains have agreed to a programme of waste reduction, and restaurants in several countries are also taking steps not only to decrease the waste but to turn it into biogas to be used for energy.

Gardner told IPS that instead of throwing away food, supermarkets should be looking at donating produce to local organisations such as soup kitchens, although it would be better if they “weren’t generating the waste to begin with.”

On biogas, some speakers said that using food or household waste for energy at the local level could contribute to wider environmental solutions, but again the main aim should be to stem the creation of waste.

“At the local level, we have seen where using food or household waste can be a successful strategy. But we have to focus on solutions that are tailored to the particular context,” she told IPS.

The ways to reduce waste can begin simply. Some U.S. food services companies found that by providing only plates (without accompanying trays), in school cafeterias, students were encouraged to take only the food they could consume, consequently throwing away 25 percent less waste.

Perhaps schools should record another version of “Eat It” for lunch hour.