This is the first of a two-part article analysing India’s plans to double coal production by the end of this decade. The article, by Chaitanya Kumar, South Asia Team Leader of 350.org, which is building a global climate movement through online campaigns, grassroots organising and mass public actions, offers four reasons why investors and the Indian government should be really wary of investing in coal for the long run. This part of the article deals with the first two reasons. The second part will be published on Mar. 19. 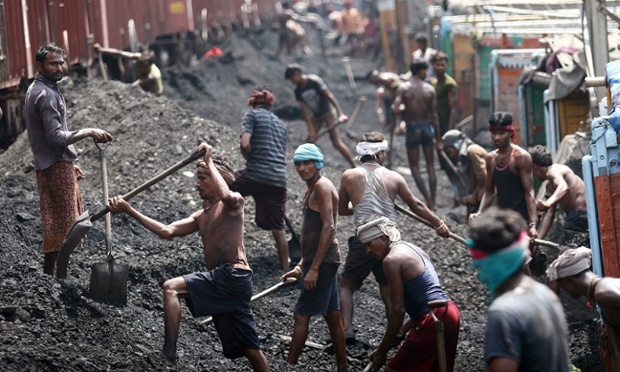 Indian coal workers. India announced in November last year that it plans to double coal production to a whopping 1 billion tonnes per annum before the end of this decade, a feat that is going to be highly improbable to pull off. Photo credit: Jaipal Singh/EPA

NEW DELHI, Mar 18 2015 (IPS) - India’s Government under Narendra Modi is in overdrive mode to please businesses and investments in the country. The much aggrandised ‘Make in India’ campaign launched in September 2014 is a clarion call for spurring investments into manufacturing and services in India and all eyes have turned to the power sector which is expected to undergo dramatic shifts.

Piyush Goyal, India’s power minister, announced in November last year that he plans to double coal production in India to a whopping 1 billion tonnes per annum before the end of this decade, a feat that is going to be highly improbable to pull off.

In an effort to enhance production, the Indian government has started a process of auctioning coal blocks, which were de-allocated by the country’s Supreme Court as a result of the coal scam that hit the country in 2012 (and resulted in notional losses of 30 billion dollars to India’s exchequer).

With domestic miners already having shown an aggressive interest in bidding at the first auction last month, a total of 204 coal blocks are set to be auctioned over the next 12 months. The first 32 auctioned blocks have yielded more than 35 billion dollars, exceeding the nominal losses from the coal scam.

Coupled with the auctions is the disinvestment of Coal India Limited (CIL), the world’s largest coal mining company. A 10 percent stake sale in early February resulted in a mixed bag response. Another state owned firm, LIC India, lapped up 50 percent of the stocks alongside a couple of international investment funds and a few Indian firms. The move generated 3.6 billion dollars in revenues for the government.

The auctions and the disinvestment of CIL can provide short-term reprieve to India’s energy and fiscal deficit woes, but there are four reasons why investors and the government should be really wary of investing in coal for the long run (10-15 years). The following are the first two.

The reality that a large proportion of coal and other fossil fuels should be left in the ground is rapidly becoming clear to big business and governments around the world. By signing on to a global agreement that pledges to limit the rise in the earth’s surface temperature to 2 degrees Celsius, India along with other major carbon emitters have effectively signalled the imminent decline in the use of fossil fuels in order to avoid the worst impacts of global warming.

To achieve this much needed and agreed upon limit on temperature rise, 82 percent of known global coal reserves should remain unextracted. This roughly translates into 66 percent of known coal reserves in India and China that should be left in the ground, according to a study published in the reputed journal Nature.

These stranded assets, or unburnable carbon, is what the Intergovernmental Panel on Climate Change (IPCC), the scientific body that informs climate policy around the world, also highlighted in its recent report on climate change mitigation.

This new reality is unravelling quicker than expected and gaining credence from the most unlikely of places. Even the International Energy Agency (IEA), which has faced consistent criticism in underplaying the role of renewable energy in favour of nuclear and fossil fuels, stated recently that “no more than one-third of proven reserves of fossil fuels can be consumed prior to 2050 if the world is to achieve the 2 degrees C goal”.

IEA’s Chief Economist Fatih Birol warned that “we need to change our way of consuming energy within the next three or four years,” because, otherwise, “in 2017, all of the emissions that allow us to stay under 2°C will be locked in.”

Coal is fast losing the rug under its feet. Nick Nuttall, the spokesman for the UN Framework Convention on Climate Change (UNFCCC) said of divestment: “We support divestment as it sends a signal to companies, especially coal companies, that the age of ‘burn what you like, when you like’ cannot continue.

This proposition will be contested fiercely by the Indian government as much as by any fossil fuel company, but as nations – under pressure – prepare to deliver a strong global climate agreement at the U.N. Climate Change Conference in Paris in December, long-term investments in coal in this rapidly growing economy will stand on very thin ice.

Even U.S. President Barack Obama’s statements during his recent visit to India suggest diplomatic pressure on India to take further action on climate change and rethink its energy options for the immediate future.

Prime Minister Modi has made it clear that he does not intend to give into such pressure from any nation but he also cannot afford the ignominy of being singled out as a country that is blocking progressive climate action in Paris.

A new report from Goldman Sachs starts with this gem of a sentence:  “Just as a worker celebrating their 65th birthday can settle into a more sedate lifestyle while they look back on past achievements, we argue that thermal coal has reached its retirement age.”

The latest data reveal that coal consumption is declining in many parts of the world, including across Europe as a whole, the United States and now, surprisingly, even China registered a small but historic decline in its coal consumption last year. The retirement of dirty coal plants in developed economies is set to cement this trend in the coming few years.

The most recent blow comes from the world’s largest sovereign fund, as Norway’s Government Pension Fund Global (GPFG), worth 850 billion dollars, announced that it had dumped 40 major coal mining companies from its portfolio on environmental and climate grounds.

Besides the climate concern, economics is increasingly in favour of alternative sources of energy, such as wind and solar.

In 2014, we saw a precipitous drop in the cost of solar energy in India. Bidding prices came down as low as 6.5 rupees a unit, a 61 percent drop over the last three years, compared with the average unit price of conventional energy like coal at around 5.5 rupees a unit.

Coupled with dramatic drops in costs of solar equipment such as panels, alongside operational, capital and maintenance costs, the path is clearly open for solar to achieve grid parity by 2017.

Meanwhile, onshore wind has in fact become the cheapest way to generate electricity in the world, laying the claims of cheap coal to rest. A report from the International Renewable Energy Agency (IRENA), an intergovernmental research organisation, has laid bare the facts.

According to the report, the levelised cost of energy or LCOE (that is, all costs considered except externalities like subsidies or environmental impacts) for solar and wind already makes them highly competitive with fossil fuel-based electricity.

The oft cited issues of high capital costs and intermittency notwithstanding, prices of small-scale residential rooftop solar systems also dropped in the range of 40-65 percent between 2008 and 2014 in Europe and the United States.

What does this mean for coal in India? If the above numbers are any measure of the future of the energy sector, heavy investments in coal beyond this decade would be economic suicide.

Coal plants once established have a lifetime of at least 30 years and given the market volatility for coal, owing to rising costs of mining and uncertain fuel supply agreements, greater prices for end consumers is inevitable.

Many pundits in India appreciate this reality and the government has given the right indicators on its pursuit of renewable energy. With a target of 165 GW, India has set an ambitious goal of adding 60 percent to its total current capacity from just solar and wind by 2022.