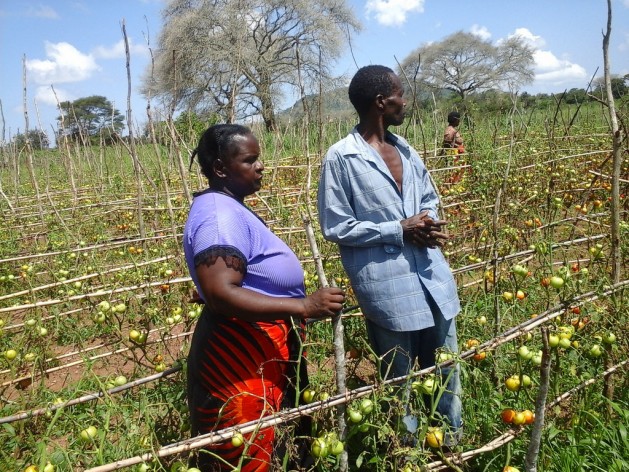 Zambian farmer Neva Hamalengo (right) knows what it means to lose crops to the ravages of weather and have no insurance coverage. Credit: Friday Phiri/IPS

MOYO, Pemba District, Zambia, Jul 6 2015 (IPS) - In the advent of unpredictable weather, smallholder rain-dependent agriculture is increasingly becoming a risky business and the situation could worsen if, as seems likely, the world experiences levels of global warming that could lead to an increase in droughts, floods and diseases, both in frequency and intensity.

Neva Hamalengo, a 40-year-old farmer from Moyo in Pemba district, Southern Zambia, knows what it means to lose everything in a blink of an eye – not only did a storm wipe out an entire hectare of market-ready tomatoes worth about 15,000 kwacha (2,000 dollars), but he also suffered maize crop failure due to a month-long drought.

“I expect very poor yields this season,” he told IPS. “We suffered crop damage through a storm and when crops needed the rains to recover, we had a severe drought.”

To make matters worse, his smallholder business had no insurance cover and, admitting that he “knew nothing about insurance,” Hamalengo said that would love to see insurance education incorporated into agricultural extension services.

“When small-scale farmers are financially literate, they are able to guide fellow farmers to uptake a particular financial product such as insurance or credit … and avoid making poor decisions” – Allan Mulando, WFP Zambia

Hamalengo’s situation represents the predicament faced by most smallholder farmers – who are generally excluded from financial services – and confirms arguments by some experts that the risk of running an uninsured business is far greater if climate is involved.

While financial inclusion is considered a key enabler for reducing poverty, the statistics in Zambia are far from encouraging. According to a 2009 FinScope survey, 63 percent of the Zambian adult population (6.4 million people) is excluded from formal financial services. Slightly over half of the adult population is engaged in farming.

Putting these statistics into context, the “unbanked” majority are poor people, with many of them smallholder farmers. Now, in an attempt to help them become more resilient to climate variability and shocks, the World Food Programme (WFP) has launched the R4 Rural Resilience Initiative, aimed at tackling risk in a holistic manner.

The initiative is based on a strategic global partnership between WFP and Oxfam America which, Mulando said, is aimed at “improving the capacity of food-insecure households to manage the risks of severe weather shocks.”

Working with partners such as the national Disaster Management and Mitigation Unit (DMMU), government ministries, the Meteorological Department, national insurance companies, as well as credit and savings institutions, the project strives to integrate activities with already running government programmes on resilience, such as the Conservation Agriculture Scaling Up (CASU), programme.

CASU, which is being run by the U.N. Food and Agriculture Organisation (FAO) in partnership with the Ministry of Agriculture and Livestock and with financial support from the European Union (EU), aims to contribute to reduced hunger, and improved food security, nutrition and income, while promoting the sustainable use of natural resources.

“R4’s overall objective is to create an environment for private sector participation through market development to ensure sustainability … through insurance cover, credit provision, asset creation programmes and safety nets, as well as household saving … all of which have been identified as alternative ways of reducing vulnerability,” explained Mulando.

Stressing the importance of the project, Southern Province Principal Agriculture Officer Paul Nyambe told IPS that “the Ministry [of Agriculture and Livestock] has been encouraging climate-resilient technologies under CASU and crop diversification amid climate-induced hazards, of which financial inclusion is a key ingredient.”

Meanwhile, for the Ministry of Lands, Natural Resources and Environmental Protection, such initiatives are always welcome because they fall within the government’s major objective of building the capacity of local communities to adapt to climate change.

“Stakeholders with initiatives that help people to adapt are welcome,” Richard Lungu, Chief Environment Management Officer at the ministry, said. “Right now, government is in the process of mobilising resources to support communities affected by a severe drought which led to crop failure.”

According to Lungu, who is Zambia’s focal point for the United Nations Framework Convention on Climate Change (UNFCCC) , “climate change is now a cross-cutting developmental issue especially for Zambia whose economy is natural resource dependent”, with over 80 percent of the population dependent on agriculture for their livelihoods.

Whereas climate shocks can trap farmers in poverty, the risk of shocks also limits their willingness to invest in measures that might increase their productivity and improve their economic situation – and this is where financial education becomes critical.

“Taking into consideration that agricultural weather-based index insurance is relatively new among our small farmers, there is a need for strong financial education,” Mulando told IPS. “When small-scale farmers are financially literate, they are able to guide fellow farmers to uptake a particular financial product such as insurance or credit … and avoid making poor decisions.”

“However, financial literacy should be the starting point because banks consider it too risky to lend money to individuals with inadequate financial capacity,” Siameja told IPS. “While farming is a function of climate, financial education is key.”

Sussane Giese, a German development and change consultant, also pointed to the so-called “dependency syndrome” which inhibits farmers from being more active. “In my interactions with some field officers,” she said, “there is something called dependency syndrome affecting farmers where they see themselves as beneficiaries and not individuals running agriculture as an enterprise.”

Meanwhile, one farmer who is singing the praises of financial literacy is 34-year-old Rodney Mudenda of Nabuzoka village in Pemba district, who has seen a dramatic change of fortunes.

“Since I was trained in financial management last year, I have changed my approach to farming. I am ready to take calculated risks like I did this season to reduce on maize and plant more sunflowers, a drought-tolerant crop. And the gamble has paid off. I expect to earn 12,000 kwacha (1,500 dollars) from an investment of 5,000 kwacha (650 dollars)”, Mudenda told IPS.