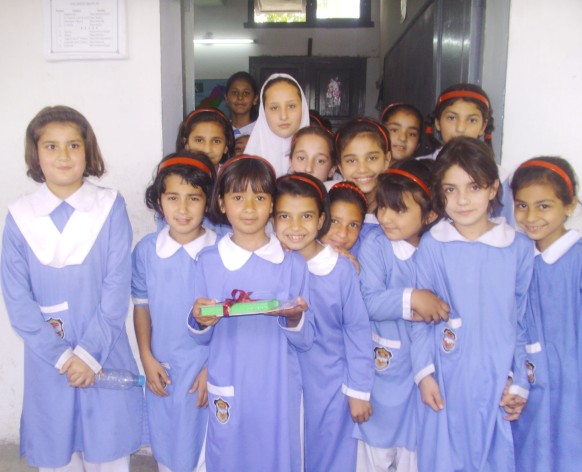 Girls in a hostel in a school in Peshawar, sent there by parents defying Taliban threats to education. Credit: Ashfaq Yusufzai/IPS

PESHAWAR, Pakistan, Sep 13 2013 (IPS) - “I miss my mother and cry every night,” eight-year-old Afaq Ali tells IPS. He is a Class 5 student at the University Public School in Peshawar, capital of Pakistan’s Khyber Pakhtunkhwa province and the administrative centre for the Federally Administered Tribal Areas (FATA) to its west.

Ali’s parents shifted him in 2010 from their village Pranghar in FATA’s Mohmand Agency to a school in Peshawar, 157 km away. The Taliban militants have since 2005 systematically destroyed 120 schools in this Pakistan district, one of the seven agencies that make up FATA on Afghanistan’s southeastern border.

“It’s a massive sacrifice that I have allowed my 10-year-old daughter to stay in a hostel.” -- Gul Fam, a housewife from Aka Khel village in the FATA district

“I feel extremely bored and lonely because most of my classmates are from around here and stay at home with their parents,” adds Ali, his frame pencil-thin. “Because of this, I cannot study.”

Like Ali, there are many other homesick children in Peshawar’s schools whose families in FATA’s militancy-afflicted districts have had no alternative but to send them out to study.

Zareen Gul from the Dande Darpa Khel village in North Waziristan is unhappy about having to send his eight-year-old daughter Spogmay to a Peshawar school. A cobbler by profession, he travels 200 km to the city every month to see her.

“It was a very hard decision for us to send Spogmay to Peshawar because we miss her very much,” her mother Reshma tells IPS.

“The Taliban militants are responsible for our woes. We want education for our children, but they just don’t allow it,” says Gul. So, even though it wrenches his heart, he is determined to send his daughter to school.

Studying in Class 3 at the Umar Farooq Public School in Peshawar, Spogmay herself says she has loving teachers and good friends at school and in the hostel but they cannot replace her parents. “I love my father, mother and sisters,” she tells IPS. “Living away from them is difficult. But I will study because that’s what my parents want.”

Peshawar has a total of 5,000 schools, 2,000 of them in the private sector. These are already overburdened with local students. “The hostels are finding it hard to house more students,” says Saleem Khan, warden of the Turangzai hostel at the Islamia Collegiate School in Peshawar.

Rooms meant for two people are being allotted to four students, he says. “The situation is becoming increasingly difficult as more students arrive from FATA every year.”

Muhammad Fakhr Alam, a Peshawar-based education officer, says they had registered about 20,000 students from FATA for admission to schools in Khyber Pakhtunkhwa in 2012. “About 90 percent of the students from FATA live in hostels,” he tells IPS.

There are, however, about 10 percent children from FATA whose parents have taken up rented accommodation in Peshawar for the sake of their wards’ education, Alam adds.

The Taliban militants, says Akhtar Rasool, deputy director of the education department in FATA, have destroyed 766 schools in the region till date. This has deprived almost 80,000 children, mostly girls, of education.

“Those who can afford it send their children to Peshawar and other adjacent districts in Khyber Pakhtunkhwa,” Rasool tells IPS. The bulk of the children stay back, without a school to go to.

Any initial sympathy the Taliban might have attracted when they were hounded out of Afghanistan in 2001 and forced to cross the 2,400-km porous border into Pakistan has long turned into anger.

“We are repentant over the hospitality we extended to Taliban and their Al-Qaeda friends when they came to seek refuge here,” says Salamat Gul, 50, a cloth merchant in the Ghareebabad village of Bajaur Agency, the smallest of FATA’s districts, located in the north.

The Taliban have destroyed 115 schools here. “They are hell-bent on depriving our children of education,” says Salamat Gul.

Twelve children from his family, including his two sons and daughter as well as nine nephews and nieces, are in Peshawar schools, he tells IPS.

Salamat Gul has travelled 120 km to Peshawar to get two of his nephews examined by doctors. They were both running a fever, and their families were extremely anxious on this account, he says. “There’s no one to take care of them at the hostel,” he tells IPS, as he waits outside the Peshawar Model School for his nephews to come out.

The Pakistan government, with financial assistance from the United States Agency for International Development, started building 130 schools in FATA in 2010 to ensure that students get back to school. “We have also contacted other donor agencies to rebuild the Taliban-damaged schools as soon as possible,” says Rasool.

Meanwhile those who are sending their children away think of it as a necessary sacrifice for their children to get educated. “It’s a massive sacrifice that I have allowed my 10-year-old daughter to stay in a hostel,” says Gul Fam, a housewife from Aka Khel village in Khyber Agency, the FATA district west of Peshawar and said to be its most literate.

Fam’s daughter Javeria Bibi is a Class 2 student at the University Model School in Peshawar and lives in a boarding house nearby. “She is very good in studies,” the proud mother tells IPS. “And not just that, she also takes part in sports and extracurricular activities.”

Fam has made a 150-km journey to Peshawar to attend the annual day function at her daughter’s school where she too was participating.

Fam now hopes that their sacrifices will bear fruit and her daughter will grow up to be an educationist who can help spread education back home. “Without education, the people of FATA cannot progress,” she says. That realisation is a battle half-won.